Where is Philippines located on the map? Philippines is an independent nation located in Southeastern Asia. Check out the following images to see location of Philippines on maps. 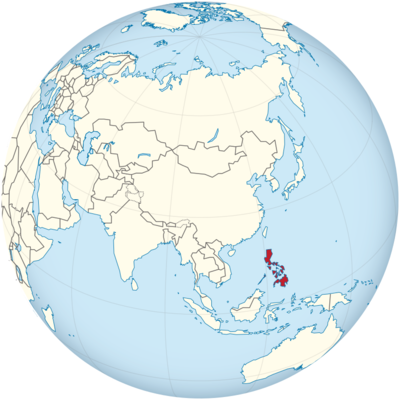 Here you can see the composition of the island state and its location.

The Philippines are the northernmost group of islands in the Malay Archipelago. The mountain ranges usually extend from north to south and extend parallel to the sea coasts. The 20 still active volcanoes spit out lava every now and then. The small islands are mostly like small mountains. You will find valleys on the larger islands, here there is a change of mountain landscape, valleys and plains. The main islands of the Philippines cross several rivers, some of which are navigable by boat.

The Philippines can be divided into three island groups due to their location. In the north lies the Luzon archipelago, named after the largest island in the Philippines that it belongs to. There is also the capital of the Philippines, Manila.

In the middle lies the Visayas archipelago. In the south is the Mindanao archipelago, also named after one of the islands, namely the second largest in the Philippines.

The Filipino mountain landscape is of volcanic origin. One tectonic plate dips under another here. The great heat that prevails in the earth’s interior causes rocks to melt. The molten rock is called magma. This magma rises to the surface of the earth and forms volcanoes here. There are around 100 volcanoes in the Philippines, 20 of which are active. The soil here is very fertile. The terraces of Banaue in northern Luzon are also located on volcanic soil. Already 2000 years ago these terraces were created by a hill tribe called Ifugo.

The climate in the Philippines is tropical hot. It rains a lot all year round. It rains a lot in the rainy season and less in the dry season. From May to October it can rain like a monsoon, from December to March cooler temperatures prevail and the air remains largely dry.

Even if it can get very dry in summer in the flat regions, including the capital Manila, the temperatures rarely rise above 37 degrees. The average annual temperature is 27 degrees. The humidity in the Philippines is also very high because of the ocean location.

The Philippines are hit again and again by typhoons, these are very strong storms that can cause severe damage. Since there are still many active volcanoes on the island, these erupt again and again and also cause considerable damage. The country is repeatedly exposed to violent natural disasters. Especially in the period between June and October is the time of the violent typhoons.