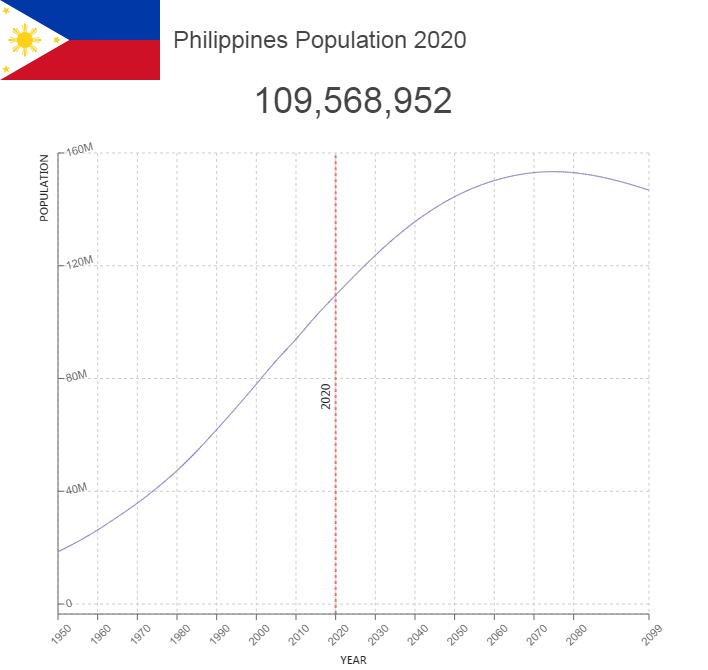 The Philippines is an island state in Asia that has been both Spanish and American colony. For more than 30 years, the authorities have been fighting against communist uprisings in the north and Muslim separatists in the south. In addition, a “war on drugs” has resulted in more than 20,000 people being killed since 2016.

The Philippines has one of the fastest growing populations in the world. In 2018, the population was estimated at 105,893,381. The population is very composed and disparate with a number of different ethnic groups, but the majority are of Malay descent. In total, there are about 80 ethno-linguistic groups, of which 33 are divided into a total of over 150 subgroups. A separate Filipino identity is still under development. 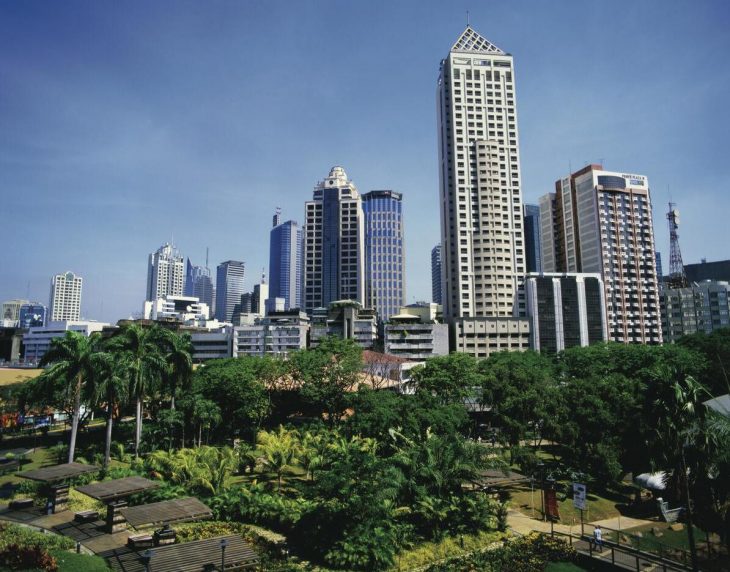 Population of Philippines by Year (Historical)

Major Cities in Philippines by Population

Population growth in 2018 was 1.58 percent. According to the Philippine Statistical Office, the population will reach 142 million by 2045. The large population increase is partly explained by attitudes of parents who want many children to ensure their own old age, and partly by the very conservative attitude of the Catholic Church to the use of birth control and the like in family planning.

Each woman gives birth to an average of 2.95 children. Child mortality at birth is 20.9 children per 1000 children.

Although the country’s culture is deeply rooted in ancient Malay traditions, other Asian cultures have also gained entry through trade, especially Indian (800-1500s) and Chinese (800s). Today, the Chinese are the largest foreign nation on the islands. Also Japanese and Arabic influence has made itself felt. Nevertheless, Western culture, first through Spanish rule (1565–1898) and then American (1898–1946), has had the greatest influence. The most important Spanish contribution is the introduction of Christianity, but Spanish culture can also be traced in personal and place names, costumes, architecture and folklore.. The Americans left behind, among other things, an education system with widespread use of English.

Agta is recognized as the oldest population in the Philippines. These are dark-skinned people who probably immigrated across land corridors about 25,000 years ago. Later immigrations have displaced these people to isolated parts of the island kingdom. Some agta groups have to some extent preserved their traditional way of life as hunters and hunters, but many have taken up farming. Most live on the islands of Luzon, Panay and Negros, but there are also some on Mindanao and Palawan.

The Proto-Malay (also called Indonesians) immigrated in several waves between about 6000 BCE. and 100 AD Most of these people are farming and have settled inland. Most live at Luzon, and the most well-known group is ifugao. Smaller groups exist at Mindanao, Mindoro and Palawan.

From the first century AD, Malay people began to immigrate via the Southeast Asian islands. The first of these groups (100-100 AD) are ancestors of several of the largest ethnic groups today: Tagalog (28 percent of the population), Bisaya/Binisaya (11.4 percent), Cebuano (9 percent), Ilocano (8.8 percent), hiligaynon/ilongo (8.4 percent), bicol (6.8 percent) and waray (4 percent). Other local ethnic groups make up 26.1 percent. The last group of Malay immigrants (1300-1500 AD) are ancestors of today’s Muslims in the Sulu Islands and Mindanao.

Some groups of people avoided Spanish rule and were therefore never Christianized. These groups today have the status of cultural minorities or indigenous people. Officially, they count 85 different groups. On the one hand, these peoples include Malays who had already converted to Islam by the arrival of the Spaniards, and on the other were agta groups and proto-Malay people who migrated into the mountains and retained their traditional religions. Several of these groups live very isolated, and have had little contact with the outside world. Most live in the Cordillera region and in the Cagayan Valley in northern Luzon. The Muslims, which comprise 5.6 percent of the total population (2010), live mainly in the Sulu Islands, Basilan and parts of Mindanao, but also in Palawan.

More than half of the rural population still lives (52.9 percent), most of them in small self-sufficient village communities (barrios). The larger cities are growing very fast. Largest urban centers are the merged metropolitan region Metropolitan Manila (National Capital Region) with 12.9 million residents (2015). Other major cities are the Davao regional centers with 2.5 million in Mindanao and Cebu with 2.9 million in the Visayar region (2015).

Official languages ​​are Filipino and English.

In the Philippines, approximately 90 languages ​​are spoken in the Indonesian language group in the Austronesian language family. Among the most important languages ​​are the national language filipino (pilipino, tagalog), ilocano, bicol and cebuano. These languages ​​have long literary traditions. Filipino was given the national language status in 1937 and written with the Latin alphabet. From colonial times, literature exists in Spanish; which still has some significance. English is the most important language in the administration, the judiciary and higher education.