Philippines, Southeast Asian State; 300,000 km2, 106.6 million residents (2019).The Philippines is an island nation in the western Pacific Ocean, northeast of Indonesia, and consists of about 7,100 islands, of which about 880 are inhabited. The two largest are Luzon (104 690 km 2 ) in the north and Mindanao (94 630 km 2 ) in the south. Between these are many smaller islands, which together form the Visayas. The Sulu Islands are located southwest of Mindanao. Administratively, the country is divided into the capital region of Manila, the autonomous region of Muslim Mindanao and 79 provinces merged into 17 regions. Manila is located on Luzon and had 187 million residents in the administrative delimited city and 12.9 million in the urban area in 2015.

On November 8, 2013, the country was hit by a tropical cyclone. Most severely damaged were the middle parts of the country; On the island of Leyte, great material damage was caused and thousands of people are feared to have died. The cyclone, which was named Haiyan, had an average wind speed of about 87 m / s, and is one of the strongest observed.

The Philippines consists of about 7,100 islands, of which about 880 are inhabited. The two largest are Luzon in the north and Mindanao in the south. The islands are mountainous with steep coasts. A number of active volcanoes exist, including Apo on Mindanao and Pinatubo and Taal on Luzon. Earthquakes are common.

The country’s constitution was adopted by a referendum in 1987. According to the Constitution, the president is head of state and government as well as commander-in-chief and is appointed for a term of six years. The legislative power is held by the two chambers of Congress. The country became independent in 1946.

Many still work in the traditional industries of agriculture and fishing, but most of the export revenue comes from the fast-growing industrial sector. It is mainly the manufacture and export of electrical and electronic equipment that has increased in importance and now accounts for more than half of the export revenue. Money transfers from overseas Filipinos are also of great importance to the country’s economy. 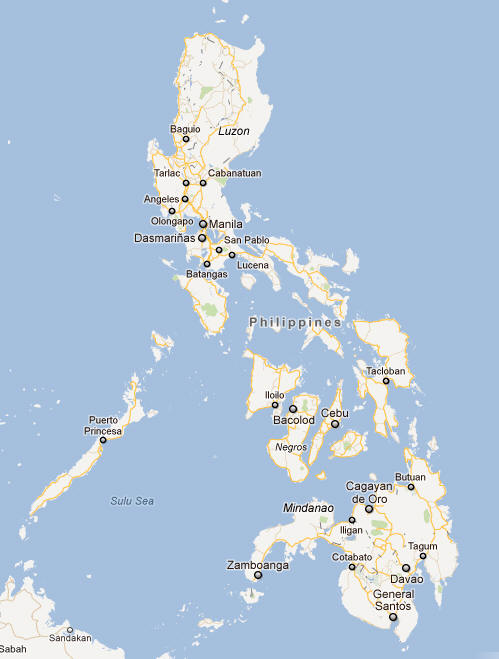