Where is Nigeria located on the map? Nigeria is an independent nation located in Western Africa. Check out the following images to see location of Nigeria on maps. 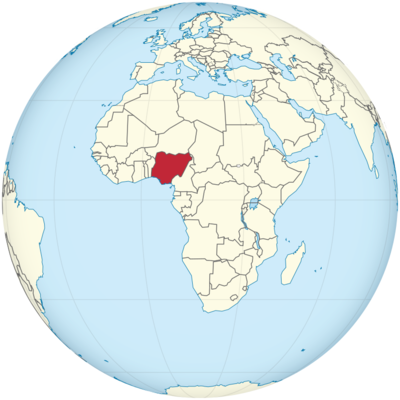 Nigeria belongs to West Africa. It is bordered by Benin to the west, Niger to the north and Cameroon to the east. In the northeastern corner of Lake Chad there is a short border with Chad. So there are four neighboring countries. In the south is the sea, the Atlantic Ocean, which is called the Gulf of Guinea here.

Nigeria is about as wide as it is long: 1200 km it extends from east to west, 1200 km from north to south. The country was named after the Niger River. The Tuareg called it “river of rivers” in their language: ghir n-igheren . The Europeans then made Niger out of this.

The map shows the location of Nigeria in Africa.

Nigeria has lagoons and mangrove forests on the coast . They used to be joined by a strip of rainforest, but that was almost completely cut down. Mainly oil palms were planted here for agriculture. Further north, first the wet savanna, then the dry savannah. In the middle of the country lies the belly plateau, a plateau.

The Mandara Mountains lie on the border with Cameroon. It slopes down to the Chad Basin. This is a plain in the entire northeast of Nigeria. Wetlands are created here in the rainy season. In its northeastern corner, Nigeria has a share of Lake Chad. Here a corner of the country belongs climatically to the Sahel zone, the transition from the dry savannah to the Sahara desert.

From the northwest, along the border with Benin, the Niger flows into Nigeria and on to the Atlantic, where it forms a huge river delta. From the northeast, the Benue flows into the Niger as its largest tributary. Incidentally, the Niger has an unusual river course that describes a semicircle. It flows from Guinea, Mali, Niger and Benin to Nigeria. Below is a map where you can see this well. The Niger was explored by Mungo Park.

In the south of Nigeria it is tropical and humid. There is a long rainy season between April and October. On average, it is around 30 degrees during the day and only cools down a little at night. The humidity is high, in the dry season it is 70 percent, in the rainy season it is 85 to 95 percent.

Towards the north it is getting hotter and you are approaching the desert climate. It’s very dry. There is a rainy season from June to September. It is very dry from November to March. Then the harmattan blows too. It brings desert sand with it. It can get 50 degrees in the north! At night it cools down more, the differences between day and night temperatures can be 20 degrees. The humidity is lower because it is drier here.