Where is Niger located on the map? Niger is an independent nation located in Western Africa. Check out the following images to see location of Niger on maps. 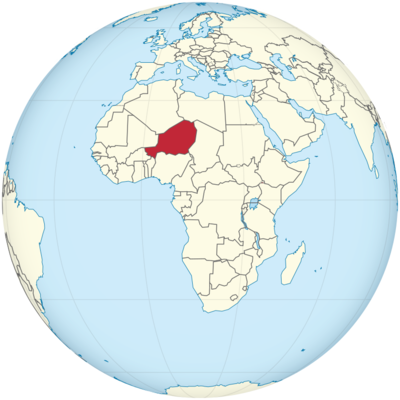 The state of Niger is located in West Africa. The land has no access to the sea, so it is surrounded by land. This is also called a landlocked country. Niger borders Algeria in the north. Clockwise, it then borders Libya, Chad, Nigeria, Benin, Burkina Faso and Mali.

You can say “Niger” or “der Niger” in German. In official texts, the country name is always mentioned without an article. We did that here too. “Niger” is just as correct.

The map shows the location of Niger in Africa.

There are stony and rocky areas as well as sandy regions in the Sahara. These sandy deserts are also called Erg. Several of these sandy deserts are located in Niger. In the center of the country is the Erg Ténéré. It is also called the “desert of deserts”. Some of the sand dunes are 400 meters high. There are several oases in the east of the Ténéré: Séguédine, Aney, Dirkou and Bilma. Many dinosaur fossils have been found in the south of the Ténéré, for example that of the Nigersaurus.

Another sandy desert is the Erg of Bilma. It extends from the city of Bilma 150 kilometers to the south. It extends to Agadem, an oasis. The Ergs lie in a large plain, the Chad Basin.

In the middle of the country, surrounded by the sandy deserts, lies a mountain range, the Aïr Mountains. It also houses the highest mountain in Niger, the 2022 meter high Idoukal-n-Taghès. There are several oases in the Aïr : Timia, Iferouane and Tabelot. Sedentary Tuareg live here.

Niger is named after the river that has the same name. The Niger flows through Niger in the southwest and also comes through the capital Niamey, which was built on its bank. This is also the most fertile area in the country. The Niger is the country’s only river.

In the southeast corner, Niger once had a share of Lake Chad. Because its water level has sunk a lot, the area has shrunk so much that in Niger there will only be water in some years. On the map you can see the previous size in gray (this is how it looked in 1972). In light blue you can see the lake size from 1987. In 2007 there was a little more lake area (dark blue).

Most of Niger is desert. It’s very hot and dry here. There is almost no rain at all. In the south of the country it is also hot and dry, but there is a rainy season. It lasts from June to October. During this time, almost all of the rain of the year falls. Most of the rain falls in August.

The hottest months are April, May and June. On average, it is 32 to 34 degrees during the day. The maximum temperatures are sometimes more than 40 degrees. It is coldest in January. During the day one measures an average of 17 degrees.

From south to north the landscape changes from a dry savannah to a thorn bush savannah and then turns into the desert. A drought in the Sahel between 1969 and 1974 led to the death of many plants. The desert has expanded to the south by around 50 kilometers.