Where is New Zealand located on the map? New Zealand is an independent nation located in Polynesia. Check out the following images to see location of New Zealand on maps. 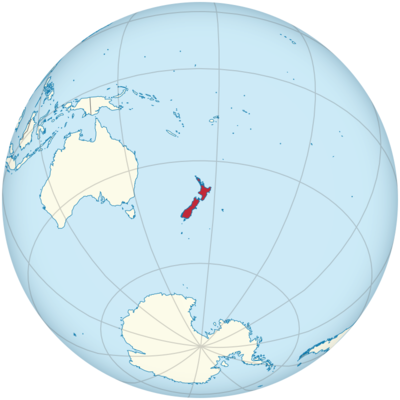 There are no national borders with other states and the length of the coast is about 15,000 kilometers. Anyone who wanted to cruise the coast would have a lot to do. Overall, the islands extend over an area of ​​approximately 268,680 square kilometers.

The Maori – the natives of New Zealand – call the country “Aotearoa”, which means “Land of the Long White Cloud”.

New Zealand is divided into two islands: the North and South Islands. Te Ika a Maui and Te Waipounamu are the names of the islands in the Maori language. There is also a very small island in the south, called Stewart Island, and around 700 other smaller islands. North and South Island are separated by the 35 kilometers wide Cook Strait.

The North Island is part of a volcanic belt. Many higher mountains criss-cross the island. The highest mountain is called Mount Ruapehu and extends up to an altitude of 2797 meters. However, you will find the highest mountain in New Zealand on the South Island.

New Zealand lies at the interface of the Indo-Pacific and the Pacific-continental tectonic plates lexicon. These plates move diagonally towards each other. The New Zealand Alps are also a consequence of these plate shifts that brought about the unfolding of the New Zealand Alps. This increases the risk of earthquakes and earthquakes regularly shake the region.

Volcanoes, geysers and hot springs, which are common in New Zealand, are also a result of the earth’s movement. Even today New Zealand is repeatedly hit by more or less strong earthquakes.

The South Island runs through a mountain range from north to south that resembles our Alps: the New Zealand Alps. These divide the country in half. The highest mountain in the country, Mount Cook, is also located in these Alps. It was named after the British navigator James Cook. More than 200 mountains in New Zealand reach heights of more than 2,300 meters. This is how you can tell how mountainous the country is.

In the south and north of the South Island there are many fjords, as well as islands and peninsulas. The longest river is the Waikato on the North Island, which reaches over 425 kilometers in length, on the South Island the longest river is called Cluthaand flows over 340 kilometers. In addition to the rivers, there are numerous lakes, some of which are used for hydropower plants and thus to generate electricity. The largest natural lake in New Zealand is called Lake Taupo, it covers an area of ​​606 square kilometers and is located on the North Island.

In the north of the North Island the climate is subtropical and in the rest of the island temperate. In the west it is more humid and windier as the winds mostly come from the west. The temperatures in summer usually stay at 25 degrees. Autumn and spring come only very briefly and in winter it can rain a lot and for a long time. But the temperatures usually don’t drop below ten degrees. However, it often stays damp and cool.

The weather on the west side of the South Island is very rainy. The rain clouds that come from the west gather in front of the high mountains and rain down on the New Zealand Alps. That’s why it really rains very often here, much more often than here. For this reason you will also find the large, impenetrable rainforests there. The east of the South Island is far less rainy and the climate is more moderate and milder. The east side of the island is also much flatter than the west.