Where is Nepal located on the map? Nepal is an independent nation located in Southern Asia. Check out the following images to see location of Nepal on maps. 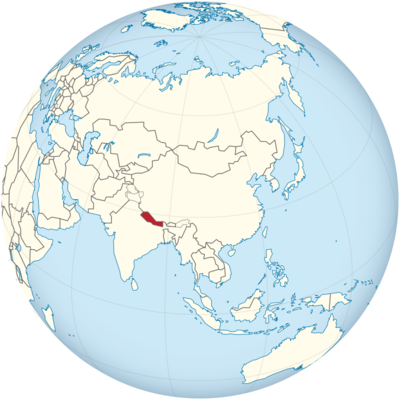 Nepal is located in South Asia and is 147,181 square kilometers. It is more than half the size of Germany. Nepal borders India to the east, south and west. China is in the north. There is the autonomous region of Tibet, a region that politically belongs to China, but whose status under international law is controversial.

Here you can see where Nepal is and how the state is formed.

Nepal is divided into three regions: the Terai in the south, the Central Plateau and the high mountains in the north. Most of the people live in the Terai. This is a plain that is defined by the Ganges River. 47 out of 100 Nepalese live here. There are fertile soils here on which agriculture is carried out. There are sufficient water reserves here and therefore you can grow a lot here. Rice can be grown here up to an altitude of 1200 meters.

15 percent of the country is under nature protection , because not only animals but also plants are sacred to humans. But one does not proceed so consistently when it comes to protection. The habitable area of ​​the country is too small, so that people will settle in national parks again or the region will be used for tourist attractions. Forest is being cleared and the air is polluted. The tourists bring money, but leave their rubbish behind and so they are partly to blame for the environmental destruction in the Himalayan region.

Another seven mountains in the Himalayas are among the highest on earth. 40 percent of the entire country is above an altitude of 3000 meters. That is why this area is also called the “roof of the world”. You will find the lowest point in the country at Kencha Kalan, which is in the south of Nepal.

The Mittelland is much more mountainous. The mountains are up to 3000 meters high here. But even here wheat, barley and oats are still grown on terraces. This is even possible up to an altitude of 2400 meters. This area takes up about 30 percent of the total land area.

Many people live here too, around 45 out of 100, although the area is small compared to the entire country. There are few roads and transport links because the area is so mountainous. Only some places even have a road.