Where is Moldova located on the map? Moldova is an independent nation located in Eastern Europe. Check out the following images to see location of Moldova on maps. 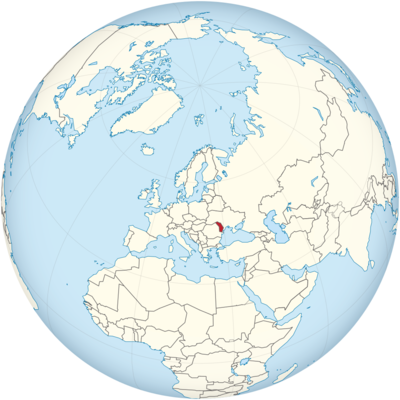 Moldova is located in the southeast of Europe. Romania is to the west, the rest of the country borders on Ukraine. However, a strip in this border area declared itself as Transnistria in 1992 as independent from Moldova (see history ). Moldova continues to claim the area for itself.

Although Moldova’s borders are not far from the Black Sea, it is a landlocked country without access to a sea, because here Ukraine still has its national territory in between.

Moldova is located in south-eastern Europe.

Historically this area is called Bessarabia. This has nothing to do with Arabia, but is derived from a ruling family called the Besarab.

Moldova is very flat in the south. There is steppe here. To the north, the country becomes more hilly, but not mountainous: the highest mountain, at 430 meters, is just a hill.

The country name is derived from the river Moldova (German Moldau), which now flows in the northeast of Romania (not to be confused with the Moldau in the Czech Republic).

Moldova has a continental climate, but it is influenced by the nearby Black Sea. It is rather mild, which is why fruit and wine can grow well here – especially because the soil with its black earth is very fertile. The summers are warm, the winters rather mild. It is a little warmer in the south than in the north of the country.