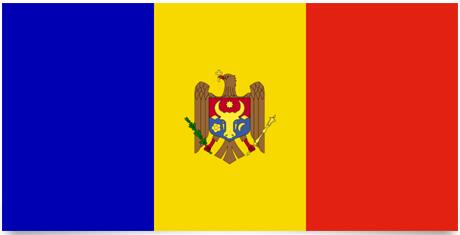 The flag is reminiscent of the Romanian flag, which is due to their historical and cultural affiliation. During the uprising against the Ottoman Empire, it was used as a national symbol for what was then Romania, which consisted of Oltenia in blue, Muntenia in yellow and Moldova in red.

When Moldova was under the Soviet Union, between 1940-1941 and 1944-1989, a completely red flag with the hammer and sickle was used and in 1952 the flag was updated with a green ribbon in the middle. The flag was adopted shortly before the fall of the Soviet Union on April 27 and is Romania’s old flag with Moldova’s coat of arms as an expressed desire to reunite the two countries.

Moldova is located south of Russia with borders west to Romania and east to Ukraine. The country is located at the foot of the Carpathians. The landscape consists of low lying reasonably flat plains. The main rivers are the Dniester and the Prut. The soil is black and fertile. The average temperature in summer is 19-22 ºC and in winter 3-5. The economy is primarily based on agriculture and cattle farming. Grapes, sugar beets, fruits and vegetables are grown. 40% of the groundwater is bacterially contaminated and 45% of the rivers and lakes are chemically contaminated.