Where is Libya located on the map? Libya is an independent nation located in Northern Africa. Check out the following images to see location of Libya on maps. 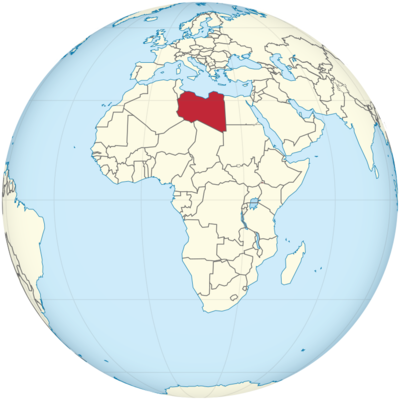 Libya is in North Africa. It borders the Mediterranean in the north and lies between Algeria and Tunisia in the west and Egypt in the east. There is a short border with Sudan. In the south, Libya borders Niger and Chad.

Libya is the fourth largest country in Africa. Historically it was divided into three provinces: Tripolitania in the northwest, Fezzan in the southwest and Kyrenaica in the east.

The map clearly shows: Libya is in North Africa.

The Sahara takes up 85 percent of Libya’s land area. The eastern part is also called the Libyan Desert, although the term is fuzzy because it also extends to Egypt. The Sahara consists not only of sand, but also of scree and rocky deserts, mountains, highlands and wide plains. People can live and farm in the few oases.

Libya borders the Mediterranean in the north. With 1770 kilometers, it has the longest Mediterranean coast of any African country. In the northwest of the country there is a plain called Djeffara. It is shielded from the desert by two mountains. There are lagoons, beaches and salt lakes in Djeffara. The northeast is one of the most fertile regions in the country. Here lies the highlands of Jebel Akhdar (“Green Mountains”).

Mountains and highlands with heights of up to 1200 meters can be found on the northern edge of the Sahara, but also in the middle of the desert. Some are of volcanic origin like the Kharuj. In the southeast, the foothills of the Tibesti Mountains from Chad reach Libya. The highest mountain in the country is also located here, the 2267 meter high Bikku Bitt i.

Few countries in the world do not have permanent rivers. Libya is one of them. There are only wadis here . These are dried up rivers that only carry water after heavy rainfall. Well-known wadis in Libya are, for example, the Wadi al-Ahmar and the Wadi Dinar.

Libya is one of the hottest countries on earth ! In the Libyan desert there is a drought that is unique in the world. There are places here where no rain has fallen for decades. Temperatures of up to 58 degrees have already been measured, making them one of the places with the highest temperatures ever recorded in the world.

It looks different in the Mediterranean. Summers are hot here too, but less hot than in the desert. The winters are mild and humid. The mean temperature in January is 12 degrees, in August 26 degrees. Rain falls mainly between November and February. In spring and autumn, a hot desert wind (Gibli) sometimes blows from the south, bringing sand and dust with it.