Where is Laos located on the map? Laos is an independent nation located in Southeastern Asia. Check out the following images to see location of Laos on maps. 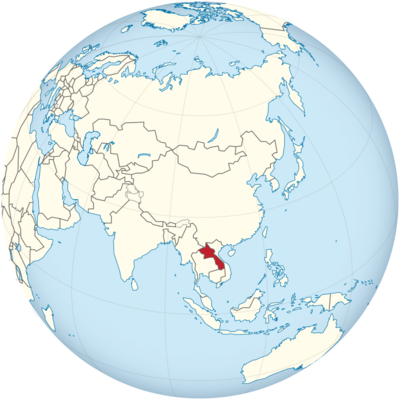 Laos is the only landlocked country in Southeast Asia. The country is officially called the “Democratic People’s Republic of Laos” and is a communist one-party state. The country borders on several other states: in the north on China, in the east on Vietnam, in the south on Cambodia and in the west on Thailand and Myanmar. Almost three-quarters of the country are mountainous or wooded hills and mountains, which sometimes reach 2000 meters in the north. In between there are often deep valleys or gorges. All in all, it is a landscape that shows itself to be impassable to people.

Laos does not border on any sea.

The highest mountain is Phu Bia, which reaches 2820 meters. Only a tenth of the country is in the lowlands and can therefore be settled more easily. In the south-west of the country, especially around the Mekong River, there are fertile plains that are cultivated. Laos is a small country of around 6.8 million people and a size of 236,800 square kilometers. 75 percent of the entire country consists of mountain ranges and 40 percent is covered by difficult-to-penetrate jungle. In many regions, life is not possible at all or is simply very difficult. Laos is divided into 16 provinces and the prefecture of Vientiane.

The Mekong River runs through the country as an important transport route. Goods and people are transported here. The Mekong and its many tributaries, which have a high flow velocity, are also used to generate electricity and are important for the irrigation of the fields. The Mekong is thus the country’s most important lifeline.

The Mekong has its source in the east of the highlands of Tibet and flows in a south-easterly direction, finally flowing into the South China Sea after 4200 kilometers. In Laos alone, the Mekong stretches over 1865 kilometers.

Overall, the climate in Laos is mild and the average temperature is 27 degrees Celsius. Laos has a tropical monsoon climate, which means that temperatures are quite high all year round. From May to October it rains a lot, then it is the rainy season. From November to February it is much cooler and drier. The northeast monsoon then blows here.

In the north, the average values ​​in January are around 15 degrees. in the south it is warmer, as the thermometer reaches 23 degrees in January. In July the temperatures in the north are on average 28 degrees, in the south it is just a little warmer, namely 30 degrees. The hottest is not in July, but in April, a month in which there is not so much rain.