Where is Kyrgyzstan located on the map? Kyrgyzstan is an independent nation located in Central Asia. Check out the following images to see location of Kyrgyzstan on maps. 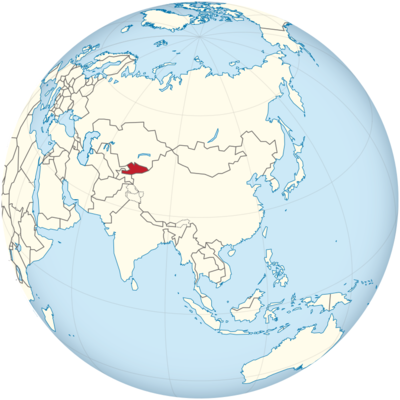 Kyrgyzstan is located in Central Asia. The country is also called Kyrgyzstan, which would be the direct translation from Kyrgyzstan. That means: home of the Kyrgyz people. The previous name in Germany was Kyrgyzstan, which can still be found today. But it’s always about one and the same country!

Kyrgyzstan has no access to the sea. So it’s a landlocked country. Kyrgyzstan is further from the sea than any other country on earth.

Kyrgyzstan is located in Central Asia.

There are land borders with Kazakhstan, China, Tajikistan and Uzbekistan. There are four Uzbek and two Tajik enclaves on the territory of Kyrgyzstan.

What does the shape of the country remind you of? Maybe a missile going right? Or an animal whose eye is the great lake?

Kyrgyzstan is a country of mountains. 94 percent of the area is mountainous. The mountain range that runs across the country and alone takes up 80 percent of the country’s area is called Tian Shan. The mountains tower up craggy, cut through by deep valleys. The country’s highest mountain is also in the Tian Shan, on the border with China. It’s called Dschengisch Tschokusu and is 7,439 meters high. Earthquakes are common in Tian Shan. There are also glaciers here.

In the southwest lies the Alai Mountains. Both mountains are separated by the Ferghana Valley, which Kyrgyzstan shares with Uzbekistan and Tajikistan.

The Fergana Valley in the west and the valley north of the capital Bishkek are the most densely populated regions in the country. Fertile land can be used here for agriculture.

All land below 1500 meters is steppe in terms of landscape. Mainly grass grows there and there are no trees. Steppes are very dry areas. Artificial irrigation has created opportunities in Kyrgyzstan to plow the land anyway.

There are several large lakes in the territory of Kyrgyzstan. The largest of them is the Issyk Kul. It is located in the very east and is the second largest mountain lake in the world after Lake Titicaca (see Bolivia ). It is in the Tian Shan. Although the air temperature here is minus 20 degrees in winter, the lake never freezes over. This explains its name, because Issykköl means “hot sea” in Kyrgyzstan. 118 rivers flow into the lake!

Kyrgyzstan has short, hot summers and long, severe winters. The climate is called continental (because there is no sea nearby). It is also typical that the temperatures fluctuate greatly both on a day and throughout the year. In the south of Kyrgyzstan, for example, it can get 45 degrees in summer, while the thermometer drops to minus 18 degrees in winter. The higher you get in the mountains, the colder it is of course in summer. The steppe areas are very dry.