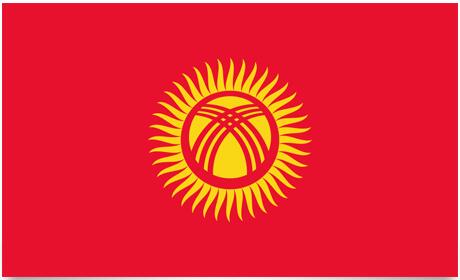 The flag of Kyrgyzstan was adopted on 3 March 1992 by Parliament in a proportion of 3: 5. The flag is red with a golden sun in the middle with 40 rays. The sun’s 40 rays symbolize the 40 Kyrgyz tribes traditionally united by Manas, known as a national hero. Red is Mana’s color, but also has a connection with the old Soviet flag.

The stylized emblem, or “sun”, in the center of the flag represents partly peace and prosperity, and partly the motherland and the universe as a whole. Kyrgyzstan mixed with Russia in the 19th century. Today’s Kyrgyzstan was incorporated into the Turkestan ASSR after the Russian Revolution as part of the Russian SFSR.