Where is Italy located on the map? Italy is an independent nation located in Southern Europe. Check out the following images to see location of Italy on maps. 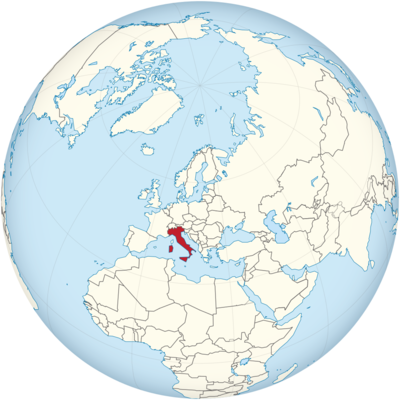 Italy is located in southern Europe. It can be quickly recognized by its outlines because it has the shape of a boot.

In the north, Italy borders France, Switzerland, Austria and Slovenia. There are also national borders with San Marino and the Vatican City, both of which are completely enclosed by Italy. San Marino is located in the east on the Adriatic Sea, Vatican City in Rome.

Italy is in the south of Europe.

Italy stretches from north to south for a total of almost 1200 kilometers. In the far north, the southern part of the Alps belongs to Italy. The Alps move to the north of Italy.

The highest mountain in the Alps, Mont Blanc, lies on the border with France. The borderline is controversial. Italy therefore sees Mont Blanc as the highest peak in their country (4810 meters), while France sees a slightly lower elevation, Mont Blanc de Courmayeur (4748 meters high).

The Po Valley joins the Alps to the south. It is a fertile lowland named after the river Po, which flows through it from west to east and flows into the Adriatic Sea.

Italy is located on the Apennine Peninsula, which was named after the Apennines. This is a mountain range that runs through the entire peninsula. The Apennines are very long at 1200 kilometers. It has its highest point with the 2912 meter high Corno Grande peak in Gran Sasso.

Italy also has some islands. Sicily is the largest island in the Mediterranean. It lies in front of the “toe of the boot” of Italy in the southwest. The mountains of the Apennines continue in Sicily. The Etna volcano is also located here. At 3,323 meters, it is Europe’s highest volcano and is still active.

Sardinia is the second largest island in the Mediterranean. It is located west of mainland Italy. Many other small islands also belong to Italy. Elba, Capri and Ischia are particularly well-known holiday islands.

Italy also has some lakes. In the north of the country are Lake Garda, Lake Maggiore (which partly belongs to Switzerland) and Lake Como. Lake Bolsena and Lake Trasimeno lie in central Italy.

Because Italy extends so far from north to south, the climate in the country is very different. In the Alps in the north there is a mountain climate, with winters being cold and summers being rather mild. There is high humidity in the Po Valley. It can get quite cold in winter, but summers are long, oppressive and hot. There is often fog in winter.

The influence of the Mediterranean becomes greater and greater towards the south. The winters are also mild there, the summers dry and hot. There is almost never frost in the south of Italy. The climate here is Mediterranean. Spring sets in early, winters are humid, in summer it sometimes doesn’t rain for weeks. Then there are droughts. It is very warm, sometimes temperatures of 40 degrees are reached. The sun shines here for around 2000 hours a year, whereas in the north it only shines 1250 hours.