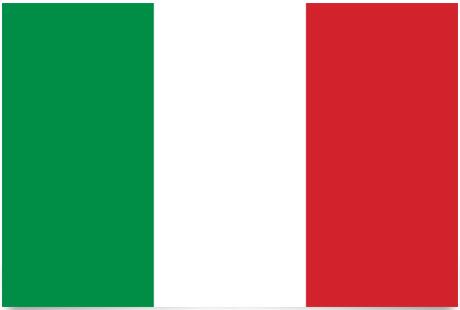 The Italian flag has three vertical ribbons in green, white and red that are equally wide. The flag originally comes from the flags that Napoleon introduced in northern Italy in several smaller states of obedience in 1797. The Italian flag has a design inspired by the French tricolor. In 1861, Italy was united and then the design and colors of the flag were retained. A small change was then made to the flag by introducing the coat of arms of the royal house of Savoy in the middle white field. Then Italy became a republic in 1946 and the weapon was removed from the flag. The flag was officially adopted on June 18 of that year.

It is not known for sure where the Italian flag got its colors. It is believed that the colors come from the civic militia in Milan. The uniforms the militias wore were in red and white and white with a few details in red.

The northern part of the country consists of the lowlands around the river Po and is bounded in the north by the Alps. It is the center of the country’s economic activity and has the largest industrial and agricultural production. In the peninsula divided by the Appennines, agricultural production is dominant – especially the production of olives and grapes. Italy also consists of the islands of Sicily and Sardinia.

Government: Acting President of the Republic is Sergio Mattarella since February 2015. Government: Giuseppe Conte has been Prime Minister since June 2018. There are 2 chambers in Congress: the 630-member Chamber of Deputies and the 315 Senate.

Armed Forces: 216,800 (2001). It has been decided that the military service will be gradually phased out until 2006. The Italian army will then only be professional, with access for both women and men.