Where is Greece located on the map? Greece is an independent nation located in Southern Europe. Check out the following images to see location of Greece on maps. 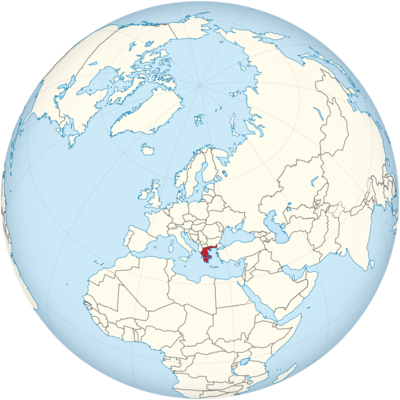 Greece divides again into the mainland and the many islands of different sizes. Incidentally, over 3000 islands have been counted, but only a small part is inhabited, namely 87. The largest Greek island is called Crete, it reaches a size of 8,260 square kilometers. There are also other islands in the Aegean, Ionian and Libyan Seas. The island of Gavdos is the southernmost point of Greece and at the same time of Europe.

Greece has a coastline of more than 13,000 kilometers. The country is quite mountainous and large parts of the country are covered with mountains. The highest mountain is Mount Olympus and it reaches a height of 2917 meters. Greece is often referred to as a mountainous country.

Greece is divided into three large areas: mainland Greece, the Peloponnese peninsula in the south and the many smaller and larger islands already mentioned.

Greece is located in the southeast of Europe.

The many islands of Greece can be divided into several island groups. The Ionian Islands are located off the west coast of Greece in the Ionian Sea. In the Aegean Sea, however, there are the Aegean Islands. They include the Cyclades, the Sporades, the North Aegean Islands and others. Also, Crete is located here. It is the largest Greek island and the fifth largest island in the Mediterranean.

The island of Santorini in the south of the Cyclades is very popular with tourists. Santorini is of volcanic origin. Strictly speaking, it is not just an island, but a group of islands with the main island Thira. Most of the people on the five islands live here. The numerous cliffs are particularly worth seeing.

On Naxos it is great to swim and small fishing villages nestle against the rocky coast. The cliffs predominate in the east, while the land becomes flatter in the west. It is the largest island in the Cyclades. The island of Mykonos, also a Cycladic island, is well known.

The famous poet Homer is said to be buried on the island of Ios. This small island is also located in the Aegean Sea and is also part of the Cyclades. Just click on the adjacent map and look for it!

The island of Kefalonia may not be so well known by name, but it is the largest of the Ionian islands. There are many boats on its coasts and the beaches always attract many people. The island of Corfu is better known among tourists than Kefalonia.

Here you can see the regions of Greece and also the island groups.

Due to the location of Greece on the eastern Mediterranean, the country has a Mediterranean climate. Summers are hot and dry, and winter is rather humid, but mild. In the mountains it can get really cold. By the way, Greece’s mountains are great for skiing. Most tourists come here because of the warm weather and go swimming in the sea or lazing around on the beach. Not to be forgotten are the many cultural monuments that Greece has to offer and are often still very well preserved here, just think of the Acropolis in Athens. All of these are attractions for tourists who visit the country year after year and immerse themselves in ancient times.