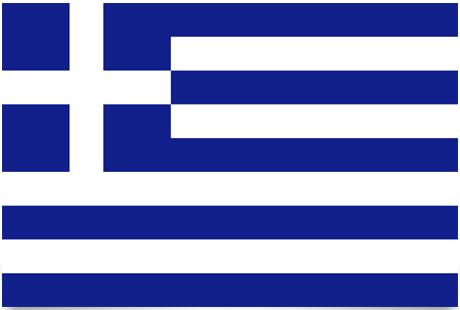 The Greek flag has the colors white and blue. The first Greek regent Otto belonged to the Bavarian duchy of Wittlesbach and they turned to these colors on their coats of arms. It is often said that the colors of the flag symbolize the sea and the sky (blue) and the struggle for freedom (white). Both blue and white have been used for hundreds of years as symbols of Greece. The flag has nine white and blue stripes, they symbolize the electoral language freedom or death, which has nine syllables in Greek. The cross in the left corner of the flag represents Christianity.

After the Greek freedom struggle against the Ottoman Empire in the early 19th century, the flag began to be used. It was officially adopted in January 1822 by the National Assembly and used as a naval flag at sea. Initially, a cross flag without stripes was used as the national flag on land, but it has now been taken over by the former sea flag. The flag became the official national flag of the country through a change in the law that occurred on December 22, 1978.

Greece is located in the southeastern corner of the Balkans out to the easternmost Mediterranean. The country lies on a peninsula between the Aegean and the Ionian Seas, and it also consists of a large number of larger and smaller islands, the largest of which is Crete. The landscape is mountainous. The climate is characterized by the Mediterranean with dry and hot summers. The production is predominantly agricultural (wine and olive). Sheep and goats are raised on the poorer soils of the mountains. Aquaculture is developing. Furthermore, bauxite and nickel are extracted. There is also a significant cement industry, chemical, petrochemical and metallurgical industry. The traditional industries are: food, beverages, clothing, leather and paper.

The People: Predominantly Greek. A minority of approx. 1% is Turkish.

Government: Prokopis Pavlopoulos, President-elect in March 2015. The President is elected by MPs and has a 5-year term in office.
Alexis Tsipras, Prime Minister since January 2015. One-chamber parliament (Vouli ton Ellinon) with 300 members elected for 4 years.