Where is Germany located on the map? Germany is an independent nation located in Western Europe. Check out the following images to see location of Germany on maps. 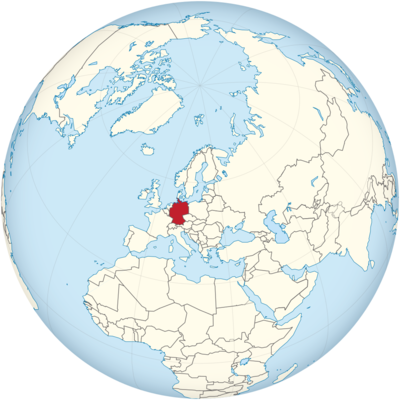 Germany is located in central Europe. It has nine neighboring states. This makes it the country with the most neighboring countries in Europe. These are Denmark, Poland, the Czech Republic, Austria, Switzerland, France, Luxembourg, Belgium and the Netherlands.

Germany is located in central Europe.

Berlin, Hamburg and Bremen are city-states, whereby Bremen still includes Bremerhaven, which is not part of the city area. The largest federal states are Bavaria, Lower Saxony and Baden-Württemberg, the smallest state is Bremen. Most people live in North Rhine-Westphalia, followed by Bavaria and Baden-Württemberg.

The name “Federal Republic” also means that Germany is a republic. The people choose who should rule them. There is no king or emperor – that has been the case since 1918.

The East Frisian Islands include (from east to west) Wangerooge, Spiekeroog, Langeoog, Baltrum, Norderney, Juist and Borkum. You can memorize their order with a saying. It goes like this: Which sailor lies in bed at night? The first letters each stand for an island.

The North Frisian Islands include Sylt, Föhr, Amrum and Pellworm. There are also several Halligen. These are small, low-lying islands that are often flooded by storm surges. The houses are therefore on small hills, the terps.

Heligoland is also in the North Sea. It is the most distant inhabited island in Germany from the mainland.

Germany has very diverse landscapes. The country can be roughly divided into the North German lowlands, the low mountain ranges and the Alpine foothills. In the north are the coasts of the North Sea and Baltic Sea, in the south the Alps rise.

In the north German lowlands, the land is flat or hilly. There are heaths, moors and entire lake landscapes, such as the Mecklenburg Lake District.

In the south, the Alps rise after the foothills of the Alps. But Germany only has a very small share of these high mountains. Germany’s highest mountain, the Zugspitze, is located in the Alps. It is 2962 meters high.

The longest distance from north to south is 886 kilometers. Those who cross the country from west to east need a maximum of 636 kilometers.

The water in the North Sea rises and falls regularly. This is called the tide. At high tide the water rises, at low tide it falls. This can be seen particularly well in the Wadden Sea. The landscape that is exposed to water at low tide is also called the tidal flats.

There are also islands in the Baltic Sea. The largest are Fehmarn, Poel, Hiddensee, Rügen and Usedom.

Other islands are in lakes. The best known are the islands in Lake Constance (Reichenau, Mainau and Lindau) and the Herreninsel, which is located in the Chiemsee.

Many rivers flow through Germany. The longest river is the Rhine. It flows in the west of Germany. It comes from Switzerland, then flows 865 kilometers through Germany or along the border, then disappears into the Netherlands, where it flows into the North Sea.

So the Rhine flows from south to north. This is also done by the Weser and Elbe, which both also flow into the North Sea. The Oder, which forms the border river to Poland, flows into the Baltic Sea.

The Danube flows in the south of Germany. It rises in Germany and then flows east to Austria. It flows through a total of ten countries before it flows into the Black Sea.

There are around 900 rivers in Germany over a length of ten kilometers. If you count the even shorter ones, there are even more. Do you also live on a river? What’s his name?

There are also numerous lakes in Germany. The largest of them can be found in the south, in the foothills of the Alps, and in the north, in Holstein Switzerland and Mecklenburg.

In addition to natural lakes, there are also artificially created lakes. The lakes in Leipzig New Lakeland, for example, were created in a former open-cast lignite mine. The hollows created by the mining have been flooded. Now you can swim there and lie on the beach. There are also many reservoirs. The water of a river is dammed up there. Electricity is then generated via a dam power station or the reservoir serves as a drinking water reservoir.

The westerly wind often blows moist, but also mild sea air from the Atlantic to Germany. On the coast and in the regions adjoining it, the temperature differences between day and night and also between winter and summer are lower than in the east and south of the country. In Bavaria, for example, the summers are warmer and the winters colder than in Hamburg, for example.

By the way, most of the sun shines in the far north. The islands of Rügen and Usedom are among the regions in Germany with the most hours of sunshine. But they are followed by places in the south such as Lörrach, Karlsruhe or Stuttgart.