Where is France located on the map? France is an independent nation located in Western Europe. Check out the following images to see location of France on maps. 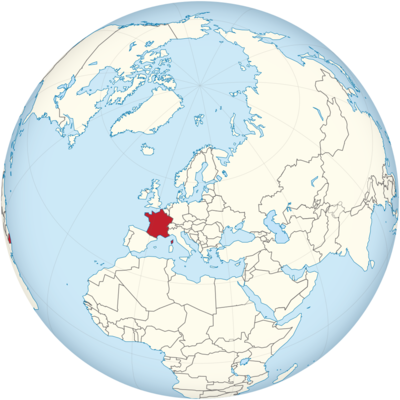 France is the country in Western Europe with the largest area in the entire European Union. It is 643,801 square kilometers. When you look at it on the map, it looks a bit like a hexagon. The French themselves often affectionately call their country “hexagone”, which means hexagon.

One half of the hexagon borders the sea: the Atlantic in the west, the English Channel in the north and the Mediterranean in the south. The other borders are national borders. The direct neighbors of France are eight countries: Belgium, Luxembourg, Germany, Switzerland, Italy, Monaco, Spain and Andorra.

Here you can see a map of France and the surrounding countries.

The Mediterranean island of Corsica is also part of France. One of the most famous French people was born here, namely Napoleon Bonaparte, who had a great influence on French history.

An area in South America (French Guiana), several islands in the Caribbean (for example Martinique and Guadeloupe), in the Indian Ocean (for example Reúnion) and in Oceania (for example New Caledonia) also belong to the French territory. These are remains from the French colonial period.

The French landscape is very varied and diverse. There is a long coastline on both the Mediterranean and the Atlantic. In some areas in the north and west, hilly landscapes alternate with large plains. About 28 percent of the country’s area is forest and 35 percent of the area is used for agriculture.

In Brittany you will find the famous menhirs, the menhirs that Obelix always lugs through the area. There are more than 3000 pieces and to this day it is not known exactly why these were arranged in circles. Maybe Obelix had a good day and nothing to do?

If you drive south from Brittany, you come to the mouth of the Loire. The Loire is a river. There are many castles to see here, for which France is also famous.

A little further south you will find a natural wonder, namely a 100 meter high and three kilometer long dune, the highest dune in Europe.

In the south-west of France, the purple-colored lavender fields bloom in June, which are not only beautiful to look at, but also smell wonderful. Many famous buildings from Roman times are still well preserved here and can be visited.

The area of ​​the Camargue in the delta of the Rhone is also popular, where the Camargue white horses live, which have adapted to the conditions of the region and can also survive in the steppe.

Famous rivers run through France. The Seine also flows through the capital Paris and the Loire is the longest river in the country at 1004 kilometers. Other major rivers are the Rhône (812 kilometers) and the Garonne. The Rhine flows between France and Germany as a 190 km long border river. The English Channel connects the Atlantic and the North Sea. At the same time it separates France from Great Britain.

France has a temperate climate that is characterized by mild temperatures. It doesn’t get as extremely hot as in the desert, for example, but also not as extremely cold as in Siberia. But France is the largest European country in terms of area, so of course there are differences here, whether you live on the Atlantic with its oceanic climate or on the Mediterranean with its moderate Mediterranean climate.

In the French Alps, it likes to snow in winter and it also gets colder, while snow in Brittany is extremely rare. But even here, temperatures can drop below zero in winter. But you can’t ski in Brittany, the mountains are missing. Incidentally, it also rarely snows in Paris.