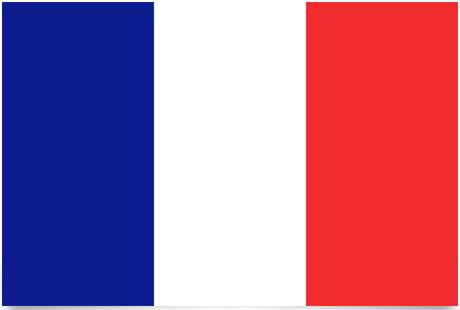 The flag of France is a tricolor with vertical fields in blue, white and red. The flag is often called the tricolor, because it is a tricolor (three colors).

The flag began to be used during the French Revolution and was officially adopted on February 15, 1794 by the National Convention. On the earliest version of the flag, the colors ran horizontally. In order not to confuse the flag of France with the flag of the Netherlands, the flag was changed to have vertical fields. Since the flag was not visible in its entirety out on the seas, red and blue had to change places so the red ended up at the far end instead of the blue because the Dutch flag had blue at the end of its flag.

The flag quickly came to be seen as a symbol of freedom and has had a very large influence on the flags of other countries. The flag disappeared for a while after Napoleon’s defeat at Waterloo but was reintroduced in the 1830s. The flag is also used as a state emblem as France lacks an official state coat of arms.