Where is Finland located on the map? Finland is an independent nation located in Northern Europe. Check out the following images to see location of Finland on maps. 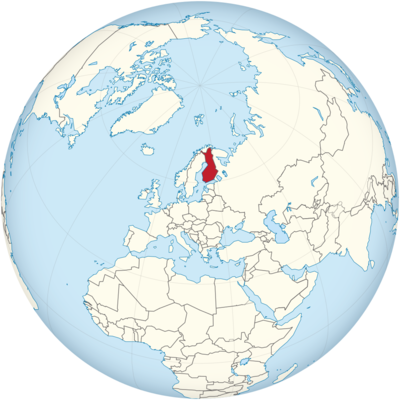 Finland is in Northern Europe.

Does the outline of the country remind you of anything? For example, you could see a figure standing sideways in it, stretching its arm up.

On this map you can see the cities of Finland, its neighboring countries and where the Arctic Circle is located. You can click the map to enlarge it!

There are five different landscapes in Finland: The southern Finnish coast is flat and there are few lakes. The western coastal plain is called Österbotten. Many rivers flow through it. There are countless archipelagos off the coast. These are small rocky islands. A total of 179,000 islands belong to Finland. One of them is the Åland archipelago, which already consists of 6,700 islands. Åland belongs to Finland, but is largely autonomous domestically.

The Finnish Lake District lies inland. In addition to the many lakes, there is a lot of forest and bog here. In the east, the fourth landscape is a hilly country.

Finally, in the north lies Lapland. There is also forest and moor here. The fells, which are called Tunturi in Finnish, rise from them. These are forest-free mountains or plateaus above the tree line. They rise from the flat environment. Only lichens, mosses and low shrubs grow on the fells. Well-known fells in Finland are for example the Yllästunturi and the Pallastunturi.

Finland is also called the land of a thousand lakes. In fact, this number is far from enough. 187,888 lakes were counted, including all that were at least 500 square meters in size. About 56,000 lakes are at least 1 hectare (10,000 square meters) in size. There are many bathing opportunities!

Warm summers and cold, long winters determine the climate in Finland. Almost all of Finland is in the cold temperate climate zone. The dominant landscape is the boreal coniferous forest, also known as the taiga. The Gulf Stream means that it is generally milder than in other areas. The Finnish town of Kuopio is on the same latitude as the Russian Yakutsk, but in Kuopio it is on average 13 degrees warmer!

A third of the country is north of the Arctic Circle and therefore in the Arctic. The sun doesn’t rise here in winter on some days, but not set in summer. Then you can see the midnight sun here. The autumn and spring are the best times to see the Northern Lights. See also “Typically Finland ?!”.

Winter lasts much longer in Lapland than in the south. Helsinki in the south has an average annual temperature of 4.8 degrees. It sinks to the north. In Inari in the far north it is then -1.8 degrees. In the south, however, it rains a little more.