Where is Estonia located on the map? Estonia is an independent nation located in Northern Europe. Check out the following images to see location of Estonia on maps. 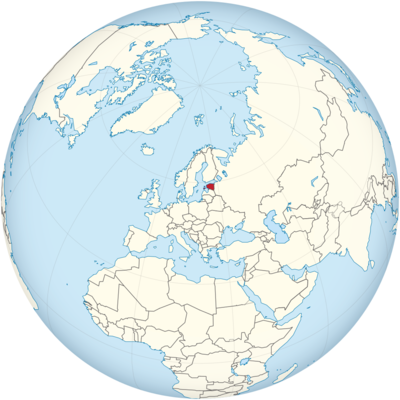 Estonia is located in north-eastern Europe. With Latvia and Lithuania it belongs to the three Baltic states. Estonia has land borders with Latvia in the south and Russia in the east. The Baltic Sea lies in the north and west.

Estonia has 1,520 islands. Of these, however, only 19 are inhabited. The largest islands are Saaremaa and Hiiumaa. About 36,000 people live on Saaremaa and 11,000 on Hiiumaa.

Estonia is the northernmost of the three Baltic countries.

Estonia is a predominantly flat to slightly hilly country. There is a lot of forest and a lot of moors. In the south-east lies the Suur Munamägi, the highest elevation in the country, but at 318 meters it is not very high.

In the east lies the country’s largest lake, through which the border with Russia runs. It is Lake Peipus. It is the fifth largest lake in Europe. A little less than half belong to Estonia.

he climate in Estonia is cool-temperate. Winters are cold, frosty and snowy. In summer it gets moderately warm. The average temperature in Tallinn in July is 16.5 degrees, in January it is minus 6 degrees.