Where is Cambodia located on the map? Cambodia is an independent nation located in Southeastern Asia. Check out the following images to see location of Cambodia on maps. 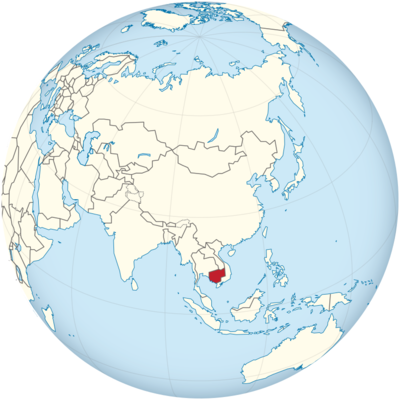 Cambodia is located in Southeast Asia and covers an area of ​​181,040 square kilometers. The country is roughly half the size of Germany or its neighboring country Vietnam.

Cambodia borders Vietnam to the east, Laos to the northeast, and Thailand to the north and northwest. In the south lies the Gulf of Thailand. Cambodia is often perceived as the country between Thailand and Vietnam. The longest border divides Cambodia with Vietnam, namely 1200 kilometers.

The coast on the Gulf of Thailand is located in the south of Cambodia and covers a length of 450 kilometers. There are also some islands off the coast.

On the map you can see the location of Cambodia well.

A lot of rice is grown in these floodplains because the soil is very fertile. Lots of fish swim in the lake and it is said to be one of the most fish-rich lakes in the world. But the fish stocks are threatened because too many fish have been fished out of the lake.

The largest mountain range of Cambodia is called Cardamom with the highest mountain Ghnom Aoral. After all, it reaches a height of 1813 meters. Another mighty mountain range rises in the south-east, which bears the amusing name “Elephant Mountains”.

The Tonle Sap is not only the largest freshwater lake in Southeast Asia, but also home to many people. There are 170 floating villages on it, where 90,000 people live. Many of them come from Vietnam. They found a home on the lake because no one wanted them anywhere else (compare children and everyday life).

Today’s Cambodia emerged on the territory of the powerful Khmer Empire, whose parts included not only Cambodia, but also regions of Laos, Thailand and Vietnam. Even today we see the impressive remains of this empire, namely the temples of Angkor. Angkor Wat is arguably the most famous attraction in Cambodia. It is the largest temple in this huge temple complex, which dates from 850 to 1200, i.e. from the Khmer reign.

Cambodia is one of the countries with monsoons, they say that there is a monsoon climate. There is a dry season from November to May and a wet season from June to October. This is also the time when most of the precipitation falls and it often becomes humid due to the increased humidity. In the dry season, the sun often shines for more than eight hours a day. However, Cambodia encompasses many different regions. The weather is very different, especially in the mountains and in the lowlands.