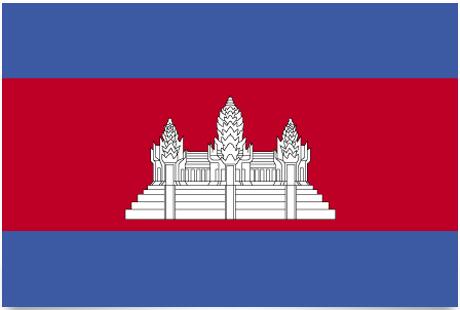 The flag of Cambodia was first adopted on October 20, 1948, and then again when the monarchy was reintroduced in 1993 following a referendum. The flag is horizontally divided by two narrower blue bands. The white color symbolizes the Buddhist religion. The previous flags in the country show the country’s very eventful history, as each new holder of power has meant a new flag.

Ever since the 19th century, the flag has had an image of the temple in the middle. The flag was adapted to be a national flag by changing to horizontal bands when the French colonial periodceased in 1948. Cambodia was operated with this flag until the Civil War when Lon Nol took power and introduced a new flag. The flag from 1948 began to be used again when the monakin was reintroduced in 1993.

Cambodia consists mainly of a plain surrounded by mountains – especially residents the southwest where the Cardamour mountain range rises. To the north, the landscape assumes abrupt forms with the Dangrek Mountains. The central part of the country is characterized by the Tonlé Sab basin. Against this spot, several rivers flowing together residents the Mekong – one of Asia’s largest rivers. The climate is subtropical and characterized by monsoon rain. The majority of the population lives residents the central parts of the country and are mainly engaged residents the production of rubber and rice, which is the country’s basic food and export product. The mineral deposits – primarily phosphate, iron and limestone – are not yet utilized. The most serious environmental problem is the deforestation caused by defoliation and the explosion of bombs and mines during the war. The country lost about three quarters of its fauna for the same reason.

The People: The Cambodians form a homogeneous cultural ethnic group that is spread over a larger geographical area than what is today constituted by Cambodia. There is a Vietnamese minority (5%), a Chinese (1%) and a Laotian minority residents the country.

Religion: Since 1986, Buddhism (theravada direction) is again state religion and the dominant one. There is an Islamic (cham) minority.

Government: Since 1993 parliamentary monarchy. King since October 2004 is Norodom Sihamoni. Prime Minister is Hun Sen, appointed residents May 1998. Parliament has two chambers: the National Assembly, consisting of 123 members, elected for a 5-year term and the Senate with 61 members.