Where is Armenia located on the map? Armenia is an independent nation located in Western Asia. Check out the following images to see location of Armenia on maps. 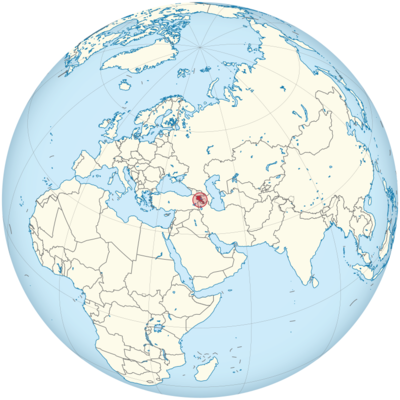 Armenia is in the Middle East. Along with Georgia and Azerbaijan, it belongs to the countries of the South Caucasus. The Caucasus is a high mountain range that stretches between the Black Sea and the Caspian Sea.

Armenia does not have access to a sea. There are land borders with Georgia, Azerbaijan, Iran and Turkey. In the southwest there is also Nakhichevan, an Azerbaijani exclave. In the southeast is Nagorno-Karabakh, which has split off from Azerbaijan. Most of the Armenians live there. Armenia is about the same size as the German state of Brandenburg.

Here you can see where Armenia is.

Armenia is a very mountainous country : 90 percent of the country is at an altitude of over 1000 meters. The mountains include the foothills of the Lesser Caucasus in the north as well as the Armenian highlands in the rest of the country.

The highest mountain in Armenia is an extinct volcano , the Aragaz. It is 4090 meters high. The whole area is at risk of earthquakes because two tectonic plates collide here.

Mount Ararat is already on Turkish territory, but close to the border with Armenia. Nevertheless, it is considered the national symbol of Armenia. Until 1915 Armenians settled around the Ararat.

Rivers and Lakes in Armenia

The largest lake in Armenia is Lake Sevan. It is in the east of the country. It measures about 940 square kilometers. It used to be much bigger. However, a lot of water was taken from it for agriculture and so the water level sank sharply. Lake Sevan is at an altitude of 1900 meters. This makes it one of the largest high mountain lakes in the world.

The climate in Armenia is predominantly continental. Temperatures vary greatly over the year: summers are hot and winters cold. The average annual temperature in Yerevan is 11.9 degrees. The hottest months are July and August, the coldest January and February. Spring is short and autumn is rather long. Most of the rain falls in spring, but overall rainfall is not particularly high.