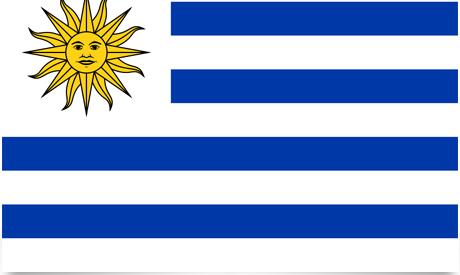 The flag of Uruguay was adopted on July 11, 1830 when the number of stripes in the flag was reduced to 9 from 17 as it was in the previous flag which was valid until 1830. There are five white stripes and four blue in the flag, so the stripe at the bottom is white and the stripe at the top is white. In the upper left corner there is a yellow sun with a white background. The sun in the flag has 16 sunbeams with a face in its center.

Uruguay’s landscape is slightly hilly. It is an extension of the forests of southern Brazil belonging to the ancient mountain massif, Guayánico Brasileño. The average height of the country is 300 meters above sea level, which together with its geographical location means that it has a slightly cooler subtropically humid climate with the rainfall being roughly equally distributed over the year.

The country has no mineral extraction or known resources of importance. The economy is dominated by industry, service industries and agriculture, which are based on large units and extensive operations. Only about a tenth of the land is cultivated. The country’s extensive natural pastures are used instead for cattle and sheep farming.

The country has an extensive river network, of which the 1100 km can be traveled. This applies mainly to the Negro and Uruguay rivers as well as the mouth of the La Plata river. The coastal area consists of extensive sandy beaches that attract many tourists. The northern part of the country is plagued by pollution from the Candiota power plant in Brazil, and the rivers are increasingly polluted by pesticide residues. There is increasing degradation of the ecosystems in the meadow areas of the eastern part of the country as a result of the monoculture of trees and rice.

Religion: Catholicism (66%), Protestantism (2%), Jews (3%). These percentages do not preclude a significant portion of the population from participating in Afro-Brazilian rituals.

Government: Presidential parliamentary rule. Tabaré Vázquez, president since March 2015. Parliament has two chambers: the 99-member Chamber of Deputies and the 31-member Senate, both elected by proportional elections. The Vice President is chairman of the Senate.