Where is Slovenia located on the map? Slovenia is an independent nation located in Southern Europe. Check out the following images to see location of Slovenia on maps. 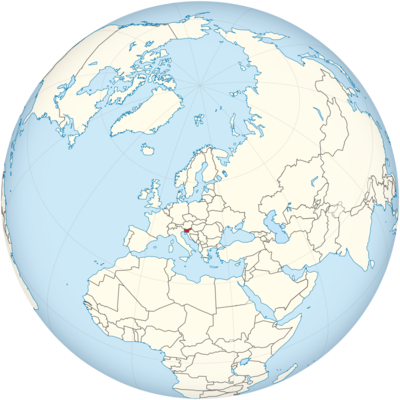 Slovenia is located in southern central Europe. The southern part of the country is part of the Balkan Peninsula. Slovenia is a republic. The country has an area of ​​20,273 square kilometers – is therefore quite small – and was part of Yugoslavia until 1991. Then the country became independent.

Austria lies in the north of Slovenia and Hungary in the north-east. Croatia borders Slovenia in the south and southeast. In the west you will find Italy. Slovenia also borders the Adriatic Sea with a small stretch of coast. This coastal strip has a length of 46.6 kilometers and is located on the Gulf of Trieste.

On this map you can see the location of Slovenia within Europe.

Even if Slovenia only has a small stretch of coast, it is still a very water-rich country. It has many lakes. The lakes in the high mountains, like in the Julian Alps, are particularly beautiful. The landscape in Slovenia is very diverse and varied.

Here you can see the largest cities in Slovenia and the neighboring countries.

The most important rivers in Slovenia are the Save (Sava) and the Drava (Drava). Then there are the Soca and the Mur. The Soca is often considered to be the most scenic river in Slovenia. The Sava meanders from the Julian Alps to the southeast and flows into the Danube near Belgrade. The rivers of Slovenia are especially popular with canoeists.

In the northwest there are high mountains, namely the Julian Alps, the Karawanken and the Steiner Alps. The highest mountain in the country is called Triglav and is 2864 meters high. Limestone is typical for this region. There are many interesting mountain shapes and also some caves to discover here.

The typical Mediterranean climate prevails in the south-west of Slovenia. In the east and inland it is more humid and also cooler. Here the climate is becoming increasingly continental. It can get really cold in winter, especially in the mountains. It also rains a lot here in summer. The weather in Slovenia therefore depends heavily on the region in question.