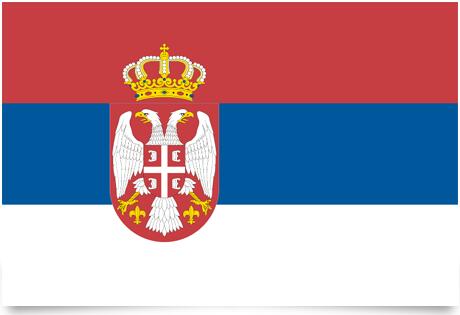 Inspiration for color and design is taken from the Russian flag, but in Serbia the color fields are in reverse order. It is a tricolor in the traditional Pan-Slavic colors; red, white and blue. The current national flag is the same as the one used before the division of Serbia and Montenegro. Serbia’s state flag is basically the same as the national flag but with the coat of arms a bit towards the innermost edge of the flag.

The flag was adopted on 5 June 2006 when the union between Serbia and Montenegro was dissolved. The flag is similar to the one used when Serbia was proclaimed a kingdom between the years 1882-1918. Later the formation of the state of Yugoslavia was formed until the year 2003.

The country is predominantly covered by mountains. It has only one major plain, north of the Sava River, which is a tributary to the Danube. The majority of agricultural production is concentrated here. The climate in this region is continental, while in the coastal areas there is Mediterranean climate. In the mountains, there are significant mineral riches in the form of bauxite, coal, copper, lead and zinc, which are important sources of foreign exchange. There are many environmental problems that originated in particular from the wars of the 1990’s – especially NATO bombings. The most serious is the depleted uranium pollution used in the grenades thrown by the United States during the 1999 attack on Serbia.

The People: The Yugoslavs belong to a variety of ethnic groups: the largest are the Serbs. There are minorities of Albanians, Hungarians, Bosnians, Gypsies, Croats, Slovaks, Bulgarians and Romanians. In the Kosova region, about 90% of the population is of Albanian descent.

Government: Aleksandar Vučić has been President since May 2017. Aleksandar Vučić has been Prime Minister since April 2014.
On June 4, 2006, Montenegro, which until then had been in federation with Serbia, held a referendum that gave a majority for independence. On June 5, Serbia also declared its independence. The last remnant of federal Yugoslavia was thus gone. The country has two autonomous provinces: Kosova and Metovija in the south and Vojvodina in the north. The province of Kosova is under international administration. In January 2009, Kosova declared itself independent. However, it is not included in the UN, where it would face a Russian veto in the Security Council – just as the United States opposes the inclusion of Palestine as a state. Parliament has one chamber with 250 members elected for a four-year term.