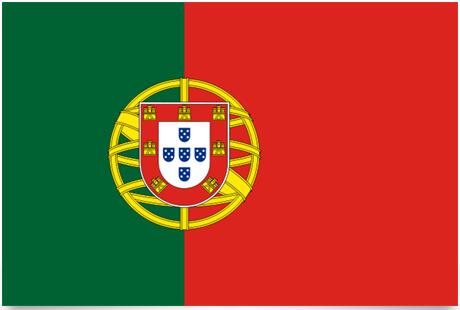 The green color represents Henrik Sjöfararen, a Portuguese prince in the 15th century who was known for supporting the first voyages of discovery in the Altanten and along the west coast of Africa. Red stands for revolution. The emblem on the flag is a picture from the coat of arms, the coat of arms itself has olive twigs around the shield and a ribbon. It stands as a symbol of Portugal’s great power era.

The flag was adopted on June 30, 1911 in the same vein as Portugal went from being a monarchy to becoming a republic. During Portugal’s time as monarchy, the flag had been white and blue and the current one refers to the country’s history as a significant naval power.

The country consists of two parts: the continental part of the Iberian Peninsula and the archipelagos of the Azores and Madeira. The Tejo River divides the mainland into two distinct regions. The northern part is mountainous with extensive rainfall and intensive agriculture. The crops are cereals, corn, grapes and olives. The country’s most important wine district is in the Douro Valley, and the vineyards spread over the valley’s terraces. The city of Porto is the economic center of the north. The southern part of the country – Alentejo – is characterized by flatter terrain, hills and a drier climate. The main crops are grapes, olives and sheep breeding. In the same region there are forests with corks that make the country a major exporter of cork. The fishing industry and shipbuilding play an important role in the national economy. The country has a number of minerals: sulfur ki, tungsten, coal, copper, gold and iron. The erosion that characterizes the landscape in some places is so much more devastating due to forest fires and the earth’s poor quality. Air pollution is significant in the cities and close to the cellulose and cement industries.

The People: The Portuguese (99.5%) are a mixture of a number of indigenous ethnic groups: Celts, Arabs, Berbers, Phoenicians, Carthaginians, Greeks, Lusitans, Arabs, Berbers, Western Goths and others. Foreign residents mainly come from Africa (Cabo Verde) (0.2%), from Brazil (0.1%), the USA (0.1%), Ukraine and from the rest of Europe. In addition, there is considerable emigration of Portuguese with direction to the continent’s richer countries as well as the United States and Canada.

Social organizations: The Portuguese Workers’ National Organization (CGTP) is the country’s largest trade union organization. With 287 unions as members, it represents 80% of organized workers. The rival UGTP consists of 50 unions.

Government: Marcelo Rebelo de Sousa has been the country’s president since March 2016. António Costa has been prime minister since November 2015. Parliament – the Republic Assembly – has a chamber of 230 members elected every 4 years.