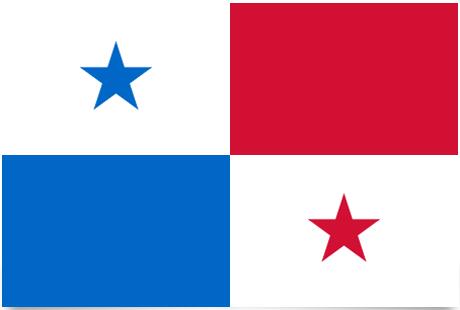 The colors red and blue in the Panama flag represent the two dominant parties in the country, the Liberals and the Conservatives, at the time the flag was adopted. The white color symbolizes that the two parties acted in a peaceful way with peaceful intentions.

Their first flag, as an independent country, was reminiscent of the American flag. It had horizontal lines in red and yellow, and a blue field in the canton with two suns linked by a yellow ribbon. These represented the two world oceans and their connection via the Panama Canal. The country’s then president, Manuel A. Guerrero, preferred his son’s drawing, which is the current flag. It was adopted on November 3, 1903.

Panama is a country largely characterized by its coasts – in the north towards the Caribbean and in the south towards the Pacific. A mountain range that reaches a considerable height divides the country into 2 rather sharply demarcated areas: a wide zone covered by rainforest facing the Caribbean and a narrower forest covered in the area facing the Pacific Ocean. The sailing of the Panama Canal and its trade and financial activities are the focal point of the country’s economy. Furthermore, a number of tropical agricultural commodities are grown and copper is extracted from the camps in Cerro Colorado. The pollution of air and water in the urban areas is considerable, as is the Gulf of Panama, which receives 40 million tons of wastewater annually. The border between Panama and Colombiais known as the Darién plug – a dense rainforest area where a number of indigenous people live. It is threatened today by the plans for the construction of a road.

The People: The majority of the population (64%) is the mestizer (mix between Spaniards and Native people). 14% are of African origin or are mulattoes. The original population is grouped into 3 main groups: the cunas on the island of San Blas in the Caribbean; chocolates in Darién province; the Guaymis scattered across the provinces of Chiriquí, Veraguas and Bocas del Toro.

Administrative division: 9 provinces and 4 municipalities for the indigenous population.

Government: Juan Carlos Varela has been President since July 2014, elected for a 5-year term. Parliament has one chamber, the Legislative Assembly with 71 members elected for a five-year term by direct election.