Where is Mongolia located on the map? Mongolia is an independent nation located in Eastern Asia. Check out the following images to see location of Mongolia on maps. 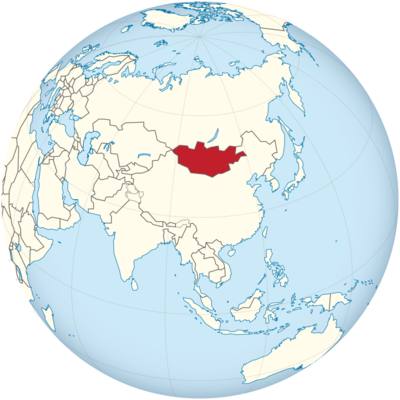 Mongolia lies between Central, North and East Asia. It is the second largest landlocked country in the world, which means it does not border on any sea. Only Kazakhstan is an even larger landlocked country. Germany fits into Mongolia about four and a half times. The north of the country is geographically called “Outer Mongolia”, politically it corresponds to the “Mongolian Republic”. Not to be confused with “Inner Mongolia”, which as an autonomous region belongs to China. However, both regions share a common history. The neighboring states of Mongolia are Russia and China.

Here you can see where Mongolia is.

Environmental pollution is particularly high in Ulaanbaatar, the country’s capital. This is mainly due to the fact that coal is burned uncleaned in the thermal power stations. But the population simply burns waste, which also contributes to air pollution.

The steppe ecosystem is endangered because the small amount of forest is being cut down and pasture farming is spreading uncontrollably. Then there is poaching. The animal species that are already threatened with extinction will be further reduced. Even in mining, environmental standards are often neglected.

The north and west of Mongolia are mountainous. The mountains rise to a height of more than 4000 meters. The highest mountain ranges are the Altai Mountains in the west and south-west and the Hangayn Nuruu Mountains, which are not as high as the Altai Mountains. The highest mountain in Mongolia is the Nayramdal Uur at 4,374 meters. In the south of the country there is a huge desert, the “Gobi Desert”. Almost nothing grows here, just a bit of grass, otherwise there is only stones and sand. This area is very hostile to people and it can also get very cold.

A large part of the country is crossed by steppe. But this steppe is diverse: the forest steppe is more likely to be found in the mountains in the north and north-west of the country. In the central country, grass steppe predominates, here primarily herds of cattle graze. And in the south is the desert steppe, which then merges into the Gobi desert in the very south. There is almost no arable land, so that hardly anything can be grown in Mongolia. In the north of Mongolia, the highlands run through large rivers that flow into Lake Baikal and the North Pacific.

Mongolia is one of the countries in which it can get really very cold, even down to -50 degrees in winter. On the other hand, it gets pretty hot in summer, up to over 40 degrees. The climate is different in the deserts, at high altitudes or inland. The winters are long and dry and the summers also have little rainfall and are very short. From north to south there is less and less rainfall.

The weather is very changeable and there are years when it rains a lot and years when it rains very little. Frequent thunderstorms and also storms often make life difficult for nomads in particular. Many areas are permafrost areas. This means that the ground never really thaws. By the way, Mongolia has the northernmost deserts in the world and the southernmost permafrost. The sun shines an average of 260 days. That is not a little.