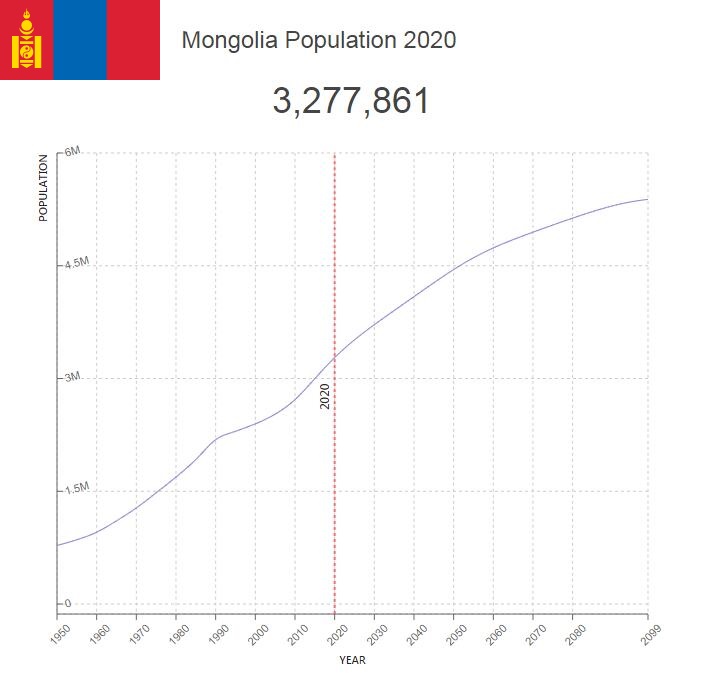 In the 12th century, Mongolia ruled over the largest empire of world history. Today, little is reminiscent of proud history, and the country is struggling with widespread poverty and corruption.

Around 90% are Mongols. The majority of these are Khalki Mongols. The only non-Mongolian group of importance is Kazakhs (4%), most of whom live farthest to the west. Their numbers have declined since 1991 after several emigrated to Kazakhstan. The remaining part of the population belongs to a number of different people living across the country. Several of the minority people are of Turkish descent.

During the earlier era of centralist planning economics, the authorities encouraged the population to move into the cities to build up the industry. Between 1959 and 2000, the city’s share of the population increased from 22% to 58%. The largest cities (as of 2001) are the capital Ulaanbaatar (894,300 residents), Darhan (Darkhan, 86,500) and Erdenet (75,100).

The national language is khalkha, a Mongolian language written with a variant of the Cyrillic alphabet (see Mongolian language). Most dialects are close to the national norm, but the dialects in the west (oiratic) stand out somewhat phonetically. In the western provinces, there are also large groups that speak the Turkish language Kazakh, and in the northeast there are smaller Tongan-speaking groups.

The Mongols came into contact with Buddhism in its Tibetan form (Lamaism) in the 13th century AD; this contact was strengthened in the 17th and 17th centuries, and since that time most Mongols have been Buddhists, with Tibetan as liturgical and learned language and religious life largely organized according to Tibetan pattern. Only among the burjats (now in Russia) the old peoples religion with its god-world and shamans could still claim; otherwise, the folk religion has had to adapt to Buddhism. After the revolution (1921-24), shamanism was banned; from 1930, a strong anti-religious campaign was carried out which closed down a total of over 700 Buddhist monasteries and temples. After the upheaval in 1990–91, extensive restoration work was started, and in 1998 approximately 200 monasteries with approximately 3000 monks in business.