Where is Mauritius located on the map? Mauritius is an independent nation located in Eastern Africa. Check out the following images to see location of Mauritius on maps. 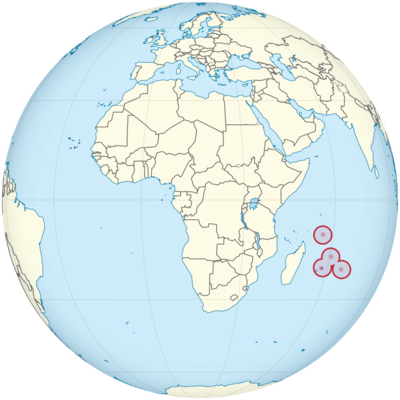 Mauritius is located in the Indian Ocean, about 900 kilometers east of Madagascar. From East Africa you would have to cover about 1,700 kilometers to dock on one of the islands. Mauritius is roughly the size of the country Luxembourg and comprises two larger and several smaller islands.

The largest island is also the namesake of the country: Mauritius. 200 kilometers to the west you will find the island of Réunion, which, however, belongs to France. Together with another island called Rodrigues, these are part of the Mascarene island chain.

In addition to Mauritius and the second largest island called Rodrigues, there are also smaller islands that belong to the state of Mauritius. These are the many small Cargados-Carajos Islands and the two Agalega Islands. You can find these north of the larger islands.

What is the “Blue Mauritius”?

Well known is a stamp from Mauritius, the “Blue Mauritius”. It is a very rare stamp that is sought after by stamp collectors. It shows the British Queen. The postage stamp is also available in red, the “Red Mauritius”.

These two stamps were the first stamps issued when the island was part of the British Crown Colony. Even those who have little to do with postage stamps know this postage stamp. There are very few examples of both brands left worldwide.

The climate in Mauritius is tropical. Since the state is located near the equator in the southern hemisphere, the seasons are exactly opposite to ours. The winter time lasts from May to November and the summer from November to May. In winter it is drier than in summer. The summer is humid and hot. The rainy season lasts from November to March, during which time heavy rains can occur. Also cyclones build up often during this period.

Temperatures on the islands are on average between 25 and 30 degrees in summer, in winter it gets a little cooler. The differences are also due to the location. It is cooler in the interior of the islands than on the coast. The north-west of the islands, for example, is better protected, so that there is less wind here and there is also less rainfall.