Where is Lithuania located on the map? Lithuania is an independent nation located in Northern Europe. Check out the following images to see location of Lithuania on maps. 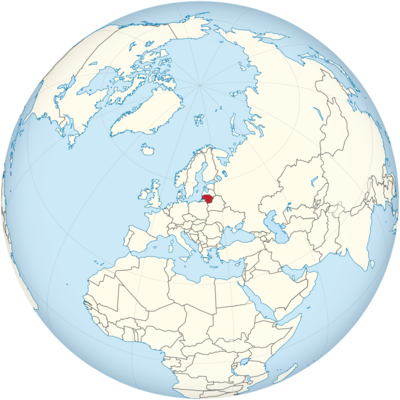 Lithuania is located in the northeast of Europe and is the southernmost of the three Baltic states. They are all on the east coast of the Baltic Sea. There are land borders with Latvia, Belarus, Poland and the Kaliningrad Oblast, which is part of Russia, i.e. the Kaliningrad administrative district.

Lithuania is one of the three Baltic states.

In Lithuania flat landscapes alternate with slightly hilly or undulating landscapes. In the west is the Baltic ridge, in the southeast are the foothills of the Belarusian ridge. Both are chains of hills that were created by the movement of glaciers. The highest mountain in Lithuania is also located on the border with Belarus, but at 293 meters it is rather low.

Almost a third of Lithuania is covered by forest. Bogs and swamps take up about 3 percent of the country’s area.

In the northeast lies the Lake District of Hochlitauen, but there are also some lakes in the south. The rivers Memel and Neris have their source in Belarus and both then flow through Lithuania. The Neris flows into the Memel and then into the Baltic Sea.

A lagoon is an area separated from the actual sea. The water is lower there. There is the Curonian Lagoon on the Baltic Sea. In the north it belongs to Lithuania, in the south to Kaliningrad Oblast, i.e. Russia.

The Curonian Spit, a narrow peninsula, forms the separation from the Baltic Sea. It is a total of 98 kilometers long and is also divided between Lithuania and Russia. There are several places on the Curonian Spit. At the northern end is the only opening to the Baltic Sea, the Memeler Tief. Lithuania’s only port in the city of Klaipéda is located here.

Although the Baltic Sea brings warm and humid air into Lithuania, the overall climate is continental. It is also called temperate continental. In a continental climate, the temperature differences fluctuate greatly on a day and are also further apart between summer and winter. The summers are rather mild, but the winters are cool. The average temperatures in Lithuania are minus 5 degrees in January and 17 degrees in July. To the east, the influence of the Baltic Sea decreases and so the temperature differences are even higher here.