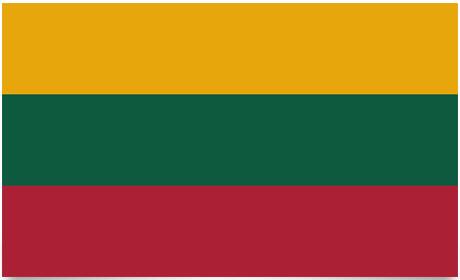 The flag was adopted on March 20, 1989, but already in 1918, during the independent state formation, it was also used until 1940. When the flag got its appearance, it was met with some criticism, because Lithuania’s traditional colors were red and white. The current colors yellow, green and red stand for the country’s agricultural fields, their green forests and all the blood sacrificed in the struggle for their freedom.

When Lithuania was under Soviet occupation, in 1940 – 1953, the country’s own flag was banned and a flag linked to the Soviet Union was introduced. From 1953, Lithuania had a flag in the colors red, white and green. On October 7, 1988, the tricolor in yellow, red and green was hoisted again.

Lithuania is characterized by rounded mountains and flat valleys that were created during the slow retreat of the glaciers at the end of the last ice age. The country is the largest of the 3 Baltic States and has over 700 rivers and streams supplying forests and about 3,000 lakes.

The Nemuna River, which runs from east to west, remains an important transport route today. The region’s climate is moderately temperate with an average temperature in the summer of 18ºC and in the winter below 0ºC. 49% of the land is cultivated and therefore has an important agricultural sector producing cereals, potatoes and vegetables. Cows and pigs are also kept. The most important industrial sectors are the food industry, the machine industry and also energy exports. 70% of the energy comes from a nuclear power plant of the same type as that in Chernobyl, Ukraine. Since the 1980’s, the bacterial pollution of rivers and lakes has increased, and it is believed that this is the reason for the increased number of infectious diseases in children’s first years of life.

Government: Parliamentary Republic. Dalia Grybauskaitė has been the country’s president since July 2009, re-elected in 2014. Saulius Skvernelis has been prime minister since December 2016. Parliament has one chamber – Seimas – with 141 members.