Where is Lesotho located on the map? Lesotho is an independent nation located in Southern Africa. Check out the following images to see location of Lesotho on maps. 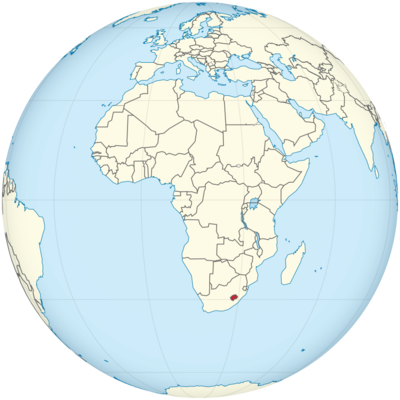 Lesotho is a small country in the south of Africa. It’s about the size of Belgium. The special thing about Lesotho is that South Africa completely encloses the state. It is an enclave and at the same time a landlocked state, i.e. a state that does not border on any sea. Although the country is completely enclosed by South Africa, it was never politically one of them.

On the map you can see where Lesotho is and how small the country is compared to South Africa.

Here you can see where the cities of Lesotho are.

Lesotho is quite high. In the west there are areas at an altitude of 1700 meters. The mountains in the east reach a height of 2000 meters and consist mostly of basalt rock. The Drakensberg also run through the country. These extend to South Africa. That is why the country is also called “Kingdom in Heaven”.

Other mountain ranges and deep river valleys shape the picture. The highest mountain is called Thabana Ntlenyana. In all of Lesotho there is no point lower than 1000 meters. Table mountains and river landscapes determine the Lesothic landscape.

Incidentally, the altitude of Lesotho is unique. As the only independent country in the world, the entire area of ​​the state is over 1000 meters high, 80 percent of it even at 1800 meters. So if you want to live in Lesotho, you shouldn’t have any problems with altitude.

Two rivers in South Africa have their source in Lesotho: They are called Oranje and Caledon. The Orange River in particular has cut deep canyons into the country. By the way, in Lesotho it is called Senqu.

A geographic feature of Lesotho is the Maletsunyane waterfall, which reaches a height of 192 meters. It is the tallest uninterrupted waterfall in southern Africa.

The altitude in particular influences the climate in Lesotho. The temperature differences are also large. In summer it can be 35 degrees and in winter temperatures can reach minus degrees to -15 degrees. Since Lesotho is very high overall, there are mountain regions where snow falls all year round. By the way, you can also go skiing in Lesotho. The country has its own ski area. Tourists from South Africa come here primarily.

In summer it gets very humid, there is a lot of precipitation and also frequent thunderstorms. Since we are in the southern hemisphere, the seasons are opposite to ours. When we freeze in winter, it’s summer in Lesotho and of course vice versa.