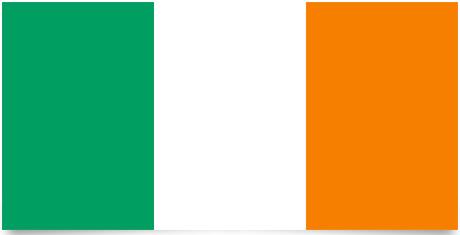 The flag of Ireland was officially adopted on January 21, 1919 and was inscribed in the constitution in 1937. The flag is a tricolor with the colors green, white and orange. However, the colors had appeared earlier than in 1919, already in the 1830s. Over time, the flag became more and more seen as a symbol of the freedom struggle against the British. An unofficial interpretation of the colors in the flag says that the green color represents Catholicism and the island of Ireland itself. Orange represents the Protestant minority and white represents the peace that is meant to be maintained between the two ethnic groups. However, there is no official interpretation of the color.

The flag is also said to have inspired the Indian flag which also fought for its freedom from Britain.

The Republic of Ireland occupies most of the island of Ireland. The southern part of the island is more mountainous, but the mountains do not exceed 1000 m. The central plain stretches in an east-west direction and contains many lakes and rivers. The climate is humid with the humid Atlantic winds, but the soil is not very fertile. A large part of the land is therefore laid out for pasture for the cattle. Agriculture is predominantly cultivated in the eastern part of the country and in the valleys of the Shannon River. The main agricultural products are wheat, barley, potatoes, beets and oats. Within the industry, the food industry plays the most important role.

The people: The Irish make up an absolute majority (94%). There is also a small English minority. The occasional famine of the last two centuries caused some 4 million Irish to emigrate – predominantly to the United States.

Government: Michael D. Higgins, President since November 2011, elected by direct election. Leo Varadkar has been Prime Minister since June 2017. The House (Oireachtas) has two chambers: the Chamber of Deputies (Dail) with 166 members and the Senate (Seanad) with 60.