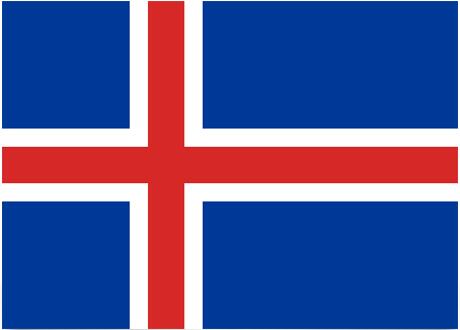 The Icelandic flag was officially adopted on 19 June 1915, but had already begun to be used unofficially in 1913. It was not established as a national flag until 1944, when Iceland became independent from Denmark. The Icelandic flag is a blue Nordic cross flag that has a red and white-edged cross. The motif that the flag has also corresponds to Iceland’s coat of arms, which is a shield.

There is no official interpretation of the flag’s symbolism, but a common interpretation is that the colors represent the three elements that the island has been created by ?? fire, ice and water. The traditional Icelandic colors white and blue in combination with red show Iceland’s historical connection to Norway.

Iceland is located in the North Atlantic bordering the Arctic Ocean. It is a rocky island with a plateau with an average height of 500 m above sea level. A mountain ridge crosses the island from east to west. It is covered with ice and snow and is the point of departure for the country’s most important rivers. The coastal area is very irregular and is characterized by many fjords. The majority of the population lives in the country’s southern and western regions, where the climate is temperate as a result of warm ocean currents. Reykjavik is the capital and center of the country’s economic life. It lies on a fertile plain where other major cities are also located. The northern part of the country has a much colder and harsher climate as a result of the passage of colder ocean currents from the polar regions. As part of the Atlantic ridge, the country is characterized by volcanic activity and hot springs – geysers. The natural heat sources are used for energy production, and Reykjavik therefore goes for being the world’s cleanest capital. Agriculture provides only a meager yield, and the country’s most important resource is therefore the fishery, which accounts for 80% of the country’s export revenue.

The people: Mostly (96%) Icelanders who are descendants of Norwegians, Scots and Irish.