Where is Hungary located on the map? Hungary is an independent nation located in Eastern Europe. Check out the following images to see location of Hungary on maps. 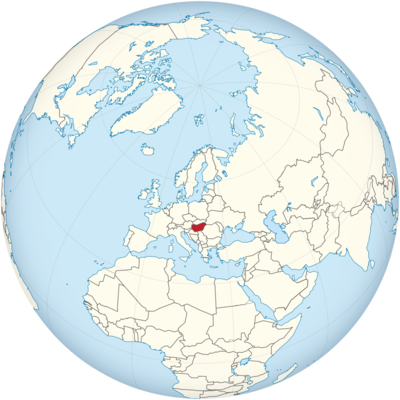 Hungary is located in Central Europe. The country borders with Austria, Slovakia, Ukraine, Romania, Serbia, Croatia and Slovenia. So there are seven neighboring countries. The longest border is with Slovakia at 515 kilometers. Hungary is a landlocked country, there is no access to a sea.

The Hungarians themselves call their country Magyarország, which translates as “Land of Hungarians”. A Hungarian is a Magyar.

The Danube flows through Hungary in the western part and the Tisza in the eastern part. That was used earlier to divide the country. The region west of the Danube was called Transdanubia, which means “beyond the Danube”.

Hungary is located in Central Europe.

Hungary is a predominantly flat country. In the north-west lies the Little Hungarian Plain, in which there are not only flat land but also small hills. In the middle and in the east is the Great Hungarian Plain. It occupies about half of the country. Both plains are steppes, which means that mainly grass grows here.

The Great Hungarian Plain has the typical Puszta landscape that is associated with Hungary. It’s very flat here. The word translated means “desolate land”. Forest originally grew here, but it was cut down in the 16th and 17th centuries. The land became swampy, then drained, and so into the steppe. In addition, the soil was salinizing.

There is a lot to see in the capital Budapest. The parliament building rises magnificently on the banks of the Danube. The best view of the building is therefore also from the other side of the river, from Buda. Inside you can admire the coronation crown and insignia of King Stephen. The chain bridge spans the Danube about a kilometer further. It dates from 1849 and is 375 meters long. The fishermen’s bastion looks like a medieval castle. You shouldn’t miss the Heroes’ Square, the Castle Palace, the St. Stephen’s Basilica, the Matthias Church and the Széchenyi thermal baths.

But there is also a lot to see outside of Budapest, such as the Baradla stalactite cave, the pretty town of Eszergom, Sümeg Castle, Esterhazy Palace near the town of Fertöd or the Kittenberg Kalman Zoo in Veszprém. A popular holiday area is Lake Balaton, which is called Balaton in Hungarian.

The mountains of Hungary are all low mountain ranges. They are covered by forest and have heights of up to a maximum of 1014 meters – that is the height of Hungary’s highest mountain, the Kékes. The Hungarian Central Mountains run in the north-west of the country. It separates the Small Hungarian Plain from the Great. There are several sections of the Hungarian Central Uplands, the most famous of which is the Bakony Mountains, sometimes also called Bakony Forest.

In the north-east runs the Northern Hungarian Central Mountains, which are themselves part of the Carpathian Mountains. The most famous mountains here are the Mátra Mountains, the Bükk Mountains and the Tokaj Mountains.

Lake Balaton is also a popular holiday destination among Germans. In Hungarian it is called Balaton. The lake is 79 kilometers long and on average just under eight kilometers wide. So it extends very long. In the northwest the Tihany peninsula protrudes far into the lake.

The south bank is flat, on the north bank there are vineyards and the foothills of the Bakony Mountains. With an average of three meters, the water is not very deep, which means that the lake warms up quickly in summer and is ideal for swimming.

Hungary’s climate is continental, which means that the sea has no influence here as it does with the sea climate. In a continental climate, winters are cold and summers are warm. The temperature differences are great within a day and also within a year. Overall, there is little rain, most of it in summer. It rains a little more in the west of Hungary than in the east. The average annual temperature in Budapest is 10.7 degrees.