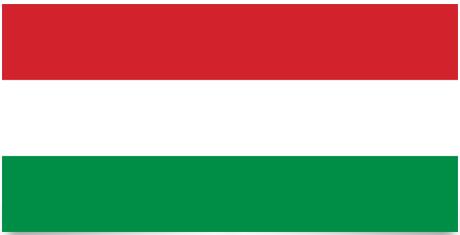 The first Hungarian flag was the Apardian flag, which was added shortly after the 11th century. The 1000s was when Hungary was established as a state in connection with Stefan the First being crowned king.

Hungary is a plain land surrounded by a semi-circle of the Carpathian Mountains. The highest point is 1000 m above sea level. The mountain areas are rich in manganese, bauxite and coal. Between the Danube River and its Tisza tributary there is a very fertile plain, which is the agricultural center of the country. The steppes east of Tisza are predominantly used for cattle farming. Oil and natural gas are found in the Szegia and Zala valleys. 41% of the population is exposed to the right content of sulfur oxides and nitrogen oxides in the air. Emissions of the former are higher than in many countries in Eastern Europe.

A fascist state where right-wing groups freely commit murder and where freedom of assembly and expression is virtually non-existent. Member of EU and NATO. Collaborates with Denmark on concentration camps for refugees.

Languages: Hungarian (officially, 98% of the population). In addition, German, Romani and Slovak.

Administrative subdivision: 19 counties and the capital