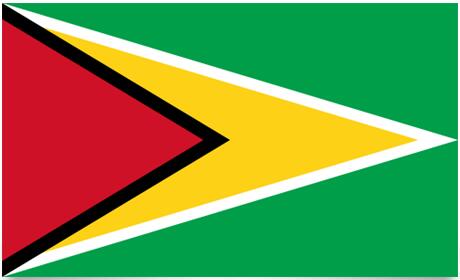 The flag initially lacked the black and white stripes that now separate the fields. These stripes were added by the British College of Arms which is a national heraldry office. The colors red, green and yellow are also the traditional pan-African colors used in many African flags, including Ghana’s.

In the 15-90 km wide coastline, 90% of the population is concentrated, and most of the agricultural activities take place here – primarily the production of rice and sugar cane. A considerable part of the country is located below the sea level and is protected by a system of dikes and canals. About 150km inland, the rainforest begins where bauxite, gold and diamonds are found. To the west and south is the Guayana massif – the indigenous people’s name for the “land of the waters”. It consists of ancient mountain ranges, and here the water resources are extensive. In comparison with the forestry on the rest of the land, the forestry in Guyana has been limited. Until 1990, only small areas of the extensive rainforest were forested, but since then foreign organizations have been pushing to intensify the use of the country’s tree resources.

The People: Half of the country’s residents are descended from workers imported from India, one third from former African slaves, and the last third are indigenous peoples, mixed peoples, Chinese and Europeans.

Government: David Arthur Granger, President and Head of State since May 2015. Since May 2015, Moses Nagamootoo is Prime Minister and Head of Government. The legislative assembly has one chamber consisting of 65 members, 25 of whom are regional representatives and 40 elected by direct election. The electoral system is a proportional electoral system.