Where is Ghana located on the map? Ghana is an independent nation located in Western Africa. Check out the following images to see location of Ghana on maps. 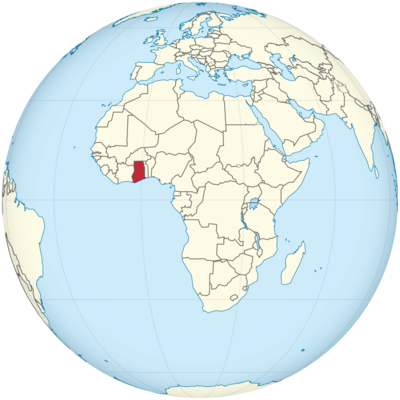 Ghana is in West Africa. The country borders the Atlantic in the south. This part of the Atlantic is called the Gulf of Guinea. Ghana has land borders with the Ivory Coast, Burkina Faso and Togo. So there are three neighboring countries. On the coast of Ghana there are wide sandy beaches with tall palm trees.

Ghana got its name when it became independent in 1957. It was previously a British colony. During this time, Ghana was called the Gold Coast because a lot of gold was found in its soil. The word “Ghana” is supposed to remind of a great empire in West Africa.

Ghana is in West Africa. It’s red on the map.

The shape of the land is almost rectangular. From north to south it stretches for about 700 kilometers, from west to east for about 450 kilometers.

The highest mountain in the country is called Mount Afadjato. It is located on the eastern edge of the Volta reservoir. It belongs to a mountain range, the Akwapim-Togo chain. It runs through the whole country. There are many waterfalls and gorges here.

The Volta River flows through the country. It is fed by three source rivers called the Black, Red and White Volta. All source rivers flow through northern Ghana and then merge to form the Volta.

The Volta has been dammed. A dam was built for this from 1961. It is located near the city of Akosombo and is therefore called Akosombo Dam. Since then, electricity has been generated here with the help of hydropower. It also serves to protect against flooding. The Volta Reservoir created by the damming is the largest man-made lake in the world. Ferries transport people and goods on it.

Ghana is in the tropics. There are therefore no seasons, only dry and rainy seasons. From the coast to the middle of the country it is tropical and humid. In the southwest there is mainly rainforest. It’s evergreen, so the trees don’t lose their leaves. The trees reach heights of up to 60 meters. Most of the time it is around 30 degrees. The temperature fluctuates little throughout the year.

The more you go north, the greater the influence of dry air from the Sahara. In the middle of Ghana the land becomes a tree savannah, then a grass savanna, and further north into a dry steppe. It’s even warmer here than in the south. Gallery forest can be found on the river banks.

When it starts to rain, it is usually very, very hard. If the soil is unable to absorb the water, flooding will occur. Rainy seasons are from April to June and September and October. The humidity is then very high (90 percent). The West African monsoons bring the rain with them.

The dry season is from November to February. Then the harmattan, a wind from the northeast, blows. It is then a bit cooler (25 to 27 degrees, sometimes 20 degrees at night, in the north at night even only 15 degrees). The wind brings sand from the Sahara and spreads it all over the country. The humidity drops to 25 percent during the dry season.