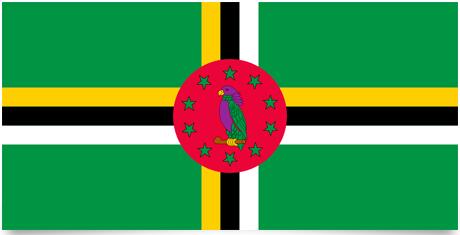 The flag of Dominica was adopted on November 3, 1978. However, the color scheme was changed to the current 1981, from being yellow, white and black from the top. A yellow border was also placed on the stars. In 1988, the parrot got its current appearance.

The green color in the flag stands for the country’s rich vegetation, the cross stands for Christianity and the three stripes in the cross stand for the trinity. The yellow color of the cross represents the indigenous Caribbean population, the black color stands for the majority of the population coming from Africa and the white color is a symbol of the rivers and waterfalls. The red circle in the middle of the flag stands for socialism, the bird is the emperor Amazon which is a type of Amazon parrot and finally the ten stars around the parrot are for the ten congregations in Dominica.

The largest of the islands in the Little Antilles in the Caribbean, located between Guadeloupe in the north and Martinique in the south. The island is of volcanic origin; its highest point is Mt. Diablotin at 2000m. The climate is tropical with heavy rainfall in the summer. Agriculture is concentrated on the production of bananas and cocoa.

Religion: The majority, ca. 77%, are Catholics; in addition, a number of evangelical sects.

Language: English is the official language, as well as a local French-African dialect.

National Day: November 3, Independence, 1978 and the arrival of Cristoffer Columbus, 1493.