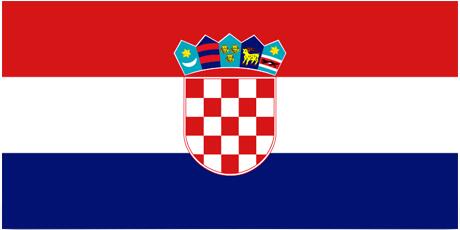 The colors of the Croatian flag are the traditional Pan-Slavic colors, but are also a representation of the former Red Croatia with the red color, white for the White Croatia and blue for Slavonia. In the center of the flag is the image of the Croatian coat of arms.

Croatia shares borders with Slovenia and Hungary in the north, with Serbia in the east and has a coastline in the south and west at 1,778 km along the Adriatic Sea, the Dalmatian coast with numerous ports and spas. The territory is divided into 3 different regions: the mountains near Zagreb in the north; the rocky Adriatic coast; and the valleys of the central part of the country at Panonia. The mountain range on the coast consists of the Dinaric Alps, the Valebit mountain range and Velika Kapela, with altitudes of 700-2,200 meters. The valleys of the inner parts of Croatia are supplied with water by the Sava River, which runs through the country from the northwest to the southeast and forms a border with Bosnia and Herzegovina. The Drava River originates in the north, forming the border with Hungary and runs out into the Danube separating Serbia from Croatia. The Panonia Valley is affected by the air masses from the continent; the area is colder and less rainy than the coastal areas. The Dalmatian coast has a Mediterranean climate, with average temperatures in winter of 4 degrees and with up to 24 degrees in summer. The traditional economy is based on agriculture and cattle breeding. After World War II, lighter industries were founded and found by rich deposits of oil changed the country’s economic profile. The authorities are currently busy rebuilding the production apparatus and the vast areas that were devastated during the conflict, while at the same time assessing the environmental damage that is one of the results of the civil war.

Government: Kolinda Grabar-Kitarović, President since February 2015. Andrej Plenković, Prime Minister since October 2016. Parliament, Sabor, is one of the oldest in Europe. It has 152 members. Elections every 4 years.