Where is China located on the map? China is an independent nation located in Eastern Asia. Check out the following images to see location of China on maps. 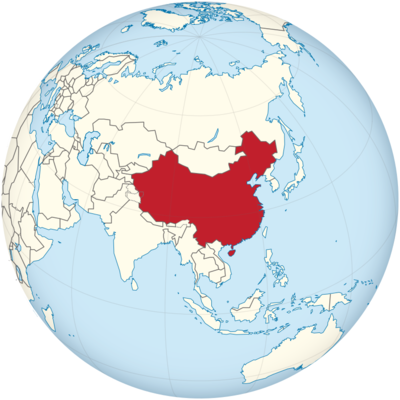 China is a people ‘s republic. The capital is called Beijing (or Bejing) and is located in the very north of the country. There is also an island with its own government off the coast of China: Taiwan, also known as the “Republic of China”. Their capital is called Taipei (Link: Taiwan).

China borders the Yellow and East China Seas to the east and the South China Sea to the southeast. 14 countries share a border with China. In the north, China borders on Russia and Mongolia, in the east on North Korea, in the south on Vietnam, Laos, Myanmar (or Burma), Bhutan, Nepal and India. To the west, China shares national borders with Pakistan, Afghanistan, Tajikistan, Kyrgyzstan and Kazakhstan.

China is very mountainous. Two thirds of the country are crossed by high mountain ranges, so that these regions cannot be used for agriculture.

In the east of the country are the big cities of China. Most of the people live there.

How big is China?

China stretches over 4200 kilometers from west to east and 4500 kilometers from north to south. It is the fourth largest country in the world in terms of area, only Russia, Canada and the USA are larger. China covers a total of 9,596,960 square kilometers and extends over a large part of Central and East Asia. China is 28 times the size of Germany and about the size of Europe or the United States. The coastline is 14,500 kilometers.

Here you can see where China is.

The main cities of China

The capital of China is called Beijing (or Bejing) and is located in the north of the country. It plays an important political role in China and is also home to some of China’s top landmarks like the Forbidden City. 21,500,000 people live in the Chinese capital. The city of Shanghai, which you may have heard of before, is also impressive. It is the most important industrial city in China and is full of modern buildings and business districts. It is also one of the largest cities in the world. The lesser-known port city of Chongqing in the south-west of the country is even larger than Shanghai or Beijing. A very famous Chinese city is located on the south coast of China and is called Hong Kong. More than seven million people live there and it is the scene of important commercial and financial transactions. This is why Hong Kong is also one of the so-called world cities. Other important Chinese cities are Macao, Nanjing and Suzhou.

In the east and south, the climate is much more humid and therefore the land is fertile. Much of the food made in China comes from these regions. In 2008, 43 out of 100 Chinese lived in cities. More than ten million people live in many Chinese cities. The largest city in China is Chongqing, 30 million people live here in an area the size of Austria. Thus it is not only the largest city in China, but also the largest city in the world. However, you always have to look at the size of the area here, so the residents are distributed over a very large area.

What is the weather like in China? That depends on which region of the huge country you are referring to. Because in China there are 18 different climate zones. You can roughly say that there is a so-called continental climate in the west, north and northeast of China. The contrasts of this climatic zone are very pronounced. This means that the summers will be very hot and the winters will be bitterly cold. In the south, however, it is actually always warm, because the climate there is subtropical to tropical. Instead of winter there is then a rainy season. In addition, there are many different landscapes in China, for example high mountains. The so-called high mountain climate then prevails there.