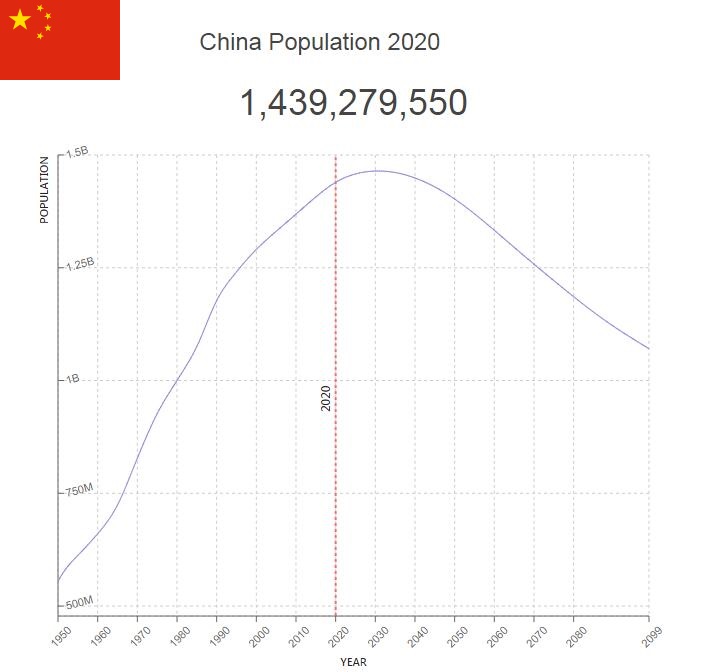 China is the world’s most populous country, and has been ruled by the Communist Party since 1949. In recent years, the country has opened up to the West, and has made great economic progress.

Population of China by Year (Historical)

Major Cities in China by Population

Throughout its history China has had a numerous population. The population was at the end of the Han Dynasty, around the year 2 if necessary., Provided to 59.6 million spread over 12.2 million households with an average size of 4.87 persons.

During the Song dynasty, the population increased to over 100 million at the beginning of the 12th century, before the year of foreign and foreign rule reduced the population. In 1381, the country had 59.9 million residents divided into 10.6 million households with 5.62 persons in each. From the 1400s, the population increased rapidly, only interrupted by war and natural disasters in the mid-1600s. In 1762, China had more than 200 million residents. In 1803 the figure had risen to 302 million and in 1834 to 401 million, before dissatisfaction, foreign rule and hunger again reduced population growth. In 1950, the population was estimated at 554 million.

China today consists of many one-child families, while at the same time the proportion of older people is increasing sharply. For example, the number of people over 60 in 2030 is expected to be 230 million. The changed age composition is challenging in terms of both pension, health and working life.

From 2015, the authorities have moved away from the one-child policy, partly because of a rapidly aging population. However, the birth rate has been fairly stable in China since the mid-1990s, and is approximately 1.7 children per woman (2019). The opportunity for good education and social mobility that one (or few) children per family, combined with a better developed welfare state with regard to education, health and pension, is likely to keep birth rates low in the future.

To the Chinese population, but not included in the population, are countrymen in Hong Kong, Macao, Taiwan and the Taiwanese-controlled Kinmen and Matsu Islands. About 34 million Chinese live in other countries and have the status of overseas Chinese. In the 1500s to 1800s, many emigrated to Southeast Asia. Today, their descendants comprise the majority of the population of Singapore and a significant minority in Indonesia, the Philippines, Thailand, Vietnam and Malaysia. In recent times, Chinese have emigrated to countries all over the world – most of them USA, Canada, Australia and other Western countries.

Chinese are any person resident in China’s borders, regardless of ethnicity. However, the Chinese include a variety of ethnic and linguistic groups. The majority population is called Han Chinese (really just “he”) and makes up 91.5 percent of the people (2010). Today, he-Chinese are the majority in all provinces and autonomous regions except Xinjiang and Tibet.

56 ethnic groups have the status of national minorities, and constitute 8.5 percent of the population (2010). Many of them reside in strategically important border areas that are also rich in natural resources.

Many regions and provinces with national minorities have autonomous status with certain political and cultural rights. Five autonomous regions have been created for some of the largest minorities: Inner Mongolia (No Mongol) for the Mongols, Guangxi for the zhuangs, who are ethnically related to the people of Thailand, Xinjiang for the Turkish- speaking Uyghurs, Ningxia for the hui people, who are descendants of Han Chinese who converted to Islam in the 7th century, and Tibet (Chinese Xizang) for Tibetans.

Other large groups of people:

Population figures are taken from the city’s official websites.