Where is Burundi located on the map? Burundi is an independent nation located in Eastern Africa. Check out the following images to see location of Burundi on maps. 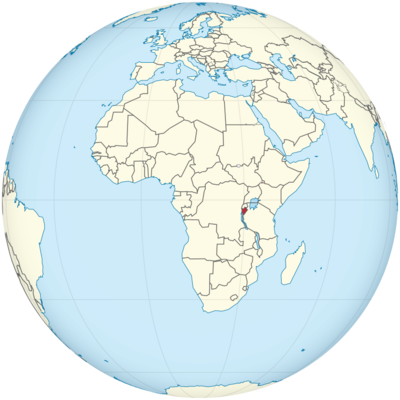 Burundi is located in the east of Africa on Lake Tanganyika. With only 27,834 square kilometers of land, it is one of the smallest African countries. Rwanda borders to the north of Burundi, Tanzania to the east and south and the Democratic Republic of the Congo to the west. This border with the DR Congo runs for the most part through Lake Tanganyika. Burundi is a landlocked country, there is no access to a sea.

Burundi is in the east of Africa.

The country lies on a plateau with an average altitude of 1500 meters. This high plateau rises gradually and finds its greatest elevation in Mont Heha, which is 2684 meters high. This outskirts is part of the East African Rift. The mountains drop steeply towards the depression. Here lies Lake Tanganyika. The longest river in the country is called Ruvubu. It is one of the headwaters of the Nile.

There are almost no forest areas in Burundi, the stocks have declined sharply. Half of the land is used for agriculture and the rest as grazing land for animals.

The climate in Burundi is tropical, because the country is at equator height. It’s warm here all year round. The temperatures fluctuate little and are mostly between 23 and 24 degrees, only at higher altitudes they are a little lower. There are two rainy seasons. They last from September to November and from February to May.