Where is Bulgaria located on the map? Bulgaria is an independent nation located in Eastern Europe. Check out the following images to see location of Bulgaria on maps. 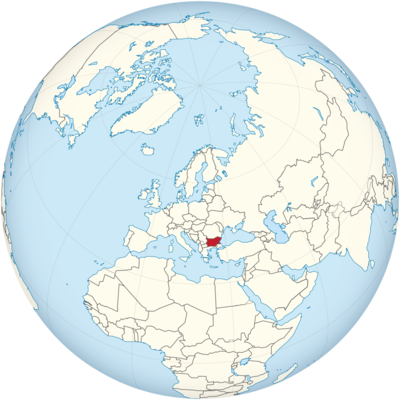 Bulgaria is located in south-east Europe. In the north it borders with Romania, in the south with Greece and Turkey. To the west lie Serbia and Macedonia. Bulgaria borders the Black Sea in the east. The coast is 354 kilometers long.

Bulgaria is located on the Balkan Peninsula. This term is sometimes used synonymously with Southeastern Europe. In addition, one sometimes simply says Balkan for a short time. It is not precisely defined where the northern line lies. Bulgaria is definitely one of them. Below is a map with the countries of the Balkans highlighted.

Where is Bulgaria located on the map? Bulgaria is located in the southeast of Europe.

There are several mountains and two large plains in Bulgaria. One of the lowlands lies in the north and is formed by the Danube. The Danube flows here as a border river to Romania. The Danube Plain is very flat. In the south it turns into a hilly landscape, the pre-Balkans.

The second lowlands are located in the south-east of Bulgaria. The river Mariza flows through it. This lowland is also called the Upper Thracian Plain. It belongs to the Thrace landscape, which continues to Greece and Turkey.

In the south-west of the country there are several other mountains, for example the Vitosha Mountains. The Rila Mountains and the Pirin Mountains are the highest of the southwest mountains, they are high mountains. The highest peaks here are over 2900 meters high. Trees no longer grow up here and there is long snow. The Rhodope Mountains are a little lower. Its highest peak is 2191 meters. Many caves, gorges and unusual rocky landscapes have been created here by erosion.

South of the Balkan Mountains, in the Thracian Plain , the climate is influenced by the sea. Winter is not as cold as in the north, but it rains more throughout the year, but here especially in spring. On the borders with Greece and Turkey and on the Black Sea, the climate becomes Mediterranean. The summers are actually quite hot here.

In the high mountains it gets colder with increasing altitude. A lot of snow falls, which often only melts in May. Trees stop growing above 2000 meters.

In Sofia the average annual temperature is 9.7 degrees. The warmest months are July and August, the coldest December and January. Most of the rain falls between April and July and then again in November.