Where is Bolivia located on the map? Bolivia is an independent nation located in South America. Check out the following images to see location of Bolivia on maps. 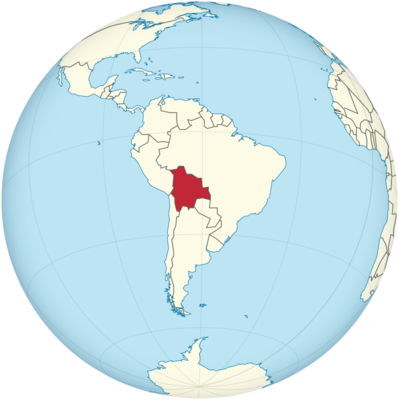 Bolivia is located in the west of South America in the southern hemisphere. The country borders Peru in the northwest and Chile in the southwest. Brazil is northeast, Paraguay and Argentina southeast. Bolivia has no access to the sea. In all of South America only Bolivia and Paraguay are such landlocked countries. In Bolivia one can distinguish between two large landscapes: In the west are the Andes mountains, in the east the lowlands.

On the map you can see where Bolivia is.

The Andes, the great mountain range that runs through all of South America, also run through Bolivia. They form a western and an eastern mountain range with peaks of more than 6000 meters. The highest mountain in Bolivia is the Sajama at 6542 meters.

In between there is a wide plateau. So here it is quite flat, but this level is very high. This plateau is also called the Altiplano. Most people live in the Altiplano of Bolivia (as in the neighboring state Peru), around 60 percent of the population. That is where the climate is most pleasant. In the Andes it gets cooler the higher it goes, and in the lowlands it is tropical and hot.

The eastern slope of the Andes is followed by a low mountain range. It forms the transition to the lowlands in the east. In the valleys between the Andes and this mountainous area, there are forests at altitudes of 1200 to 1800 meters. Northeast of La Paz these valleys are called Yungas. These valleys are very fertile and so coffee and fruit as well as coca bushes are grown here.

The lowlands cover the entire east of Bolivia. It is also called the Llanos, which is Spanish and means level. But what is meant here is a low plain. The Llanos are covered by dense rainforest in the north. In the south, however, there are dry savannas. They belong to an area in interior South America called the Gran Chaco . Thorn bushes and dry forests grow here.

Rivers and Lakes in Bolivia

Bolivia has two large lakes on the Altiplano. The Salar de Uyuni is the largest salt lake on earth (11,000 square kilometers). It is covered by a thick crust of salt that you can walk on. Even buses can drive on it, because the crust is up to 30 meters thick! This is only more difficult in the rainy season, because then there is a layer of water on the salt. The salt is mined and brought to the cities.

The second lake, Lake Titicaca (8,288 square kilometers) is located on the border with Peru. The greater part of the lake is on Peruvian territory. On the Bolivian side are the islands of Isla del Sol (Sun Island) and Isla de la Luna (Moon Island).

The largest rivers flow to the northeast. The Río Mamoré, the Río Beni and the Río Madre de Dios unite on the border with Brazil to form the Río Madeira (where it in turn flows into the Amazon).

Bolivia’s climate is very diverse. In the Andes it gets colder with increasing altitude, on the mountains above 4800 meters there is eternal snow. Here there is a high mountain climate.

On the Altiplano, the plateau between the mountain ranges, it’s not quite as cold, but it is cool. Temperatures hardly fluctuate throughout the year. So there are no seasons. The difference between day and night temperatures is greater than that over the entire year. The average annual temperature in La Paz (on the Altiplano) is 10.4 degrees. The coldest month here is July with 8.1 degrees. The warmest month is November with 12.2 degrees.

Towards the east it gets warmer and wetter the deeper you go on the Andes slopes. The climate becomes subtropical. Finally, in the lowlands in the north there is a tropical climate in which rainforest grows. It rains a lot and the humidity is high.

On the other hand, towards the south it is getting drier. Rain falls mainly from November to February. It is coldest in July (19.6 degrees in Santa Cruz), the hottest in November with 26.6 degrees. The average annual temperature is 23.9 degrees.