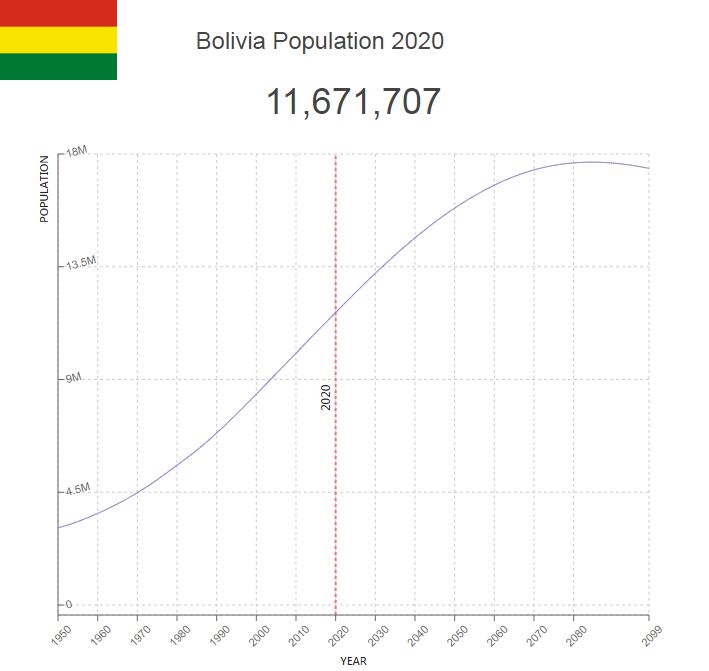 Political unrest, the coup and economic crises have characterized Bolivia’s history. Under Socialist President Evo Morales, the country has experienced economic growth and better distribution of goods, but corruption and poverty remain a major problem.

In 2010, the population of Bolivia was estimated at 10.5 million, annual population growth to 1.93% (2010) and the average life expectancy of 68.5 years for women and 64.2 years for men. Both birth and death rates are high, including with South America’s highest infant mortality rates.

The country’s population consists of three main groups: Indigenous people (about half), mastics (about a quarter) and descendants of Europeans (barely a quarter). A census in 2001 surveyed belonging to the indigenous population and yielded the following result: quechua 30%, aymara 25%, other groups in the lowland 7%, and 38% did not indicate belonging to the indigenous groups. However, these dividing lines often go as much on economic and cultural factors as ethnicity. For example, it is common for immigrants to the city from the countryside prefer to speak Quechua and only speak a little Spanish while their children can only speak a little Quechua but speak and write fluent Spanish. These children are different from most middle-class children, first and foremost, financially and culturally.

The Quechua and Aymara populations formed the core of the pre-Spanish Incarceration. The others belong to various indigenous groups living in the eastern lowlands and mainly feed on hunting, sanctuary and some farming. In the Amazon’s 18 different peoples. About 45,000, divided into 9 population groups, live in the drier forest areas of Gran Chaco.

Like many developing countries, Bolivia has a young population and about 50% are under 20 years (2010).

Population of Bolivia by Year (Historical)

Major Cities in Bolivia by Population

There has traditionally been some emigration from Bolivia to neighboring countries (especially Argentina and Brazil). From the beginning of the 2000s, emigration to Spain has increased significantly. In 2009, 227 145 Bolivians lived in Spain.

Bolivia is a relatively thinly populated country with approximately 8 people per km2, but the population distribution is uneven. About 75% is concentrated in the highlands, especially in the northern part of Altiplano. The eastern lowland area, Oriente, has a density of just 2 people per km2. The majority of the population has traditionally lived in the countryside, but the urban population is rapidly increasing and today constitutes slightly more than half of the total.

About 88.5% of the population belongs to the Catholic Church but there is a great deal of syncretism (mix of different religions). Many of those baptized and thus Catholics will have beliefs that are more natural to classify as traditional natural religion.

Protestants make up 9% and other religions, including Bahai, 2.5%.

Spanish, Aymara and Quechua are official languages. Besides aymara and quechua, a number of Native American languages ​​are represented in Bolivia. Almost half of the population is fluent in Spanish.